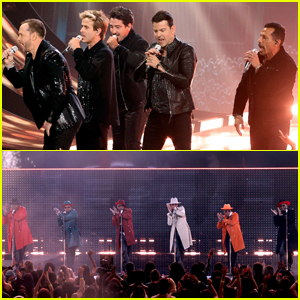 It’s a battle of the boy bands from Boston at the 2021 American Music Awards!

New Kids on the Block and New Edition took to the stage for a “Battle of Boston” performance during the awards show held on Sunday (November 21) at the Microsoft Theater in Los Angeles.

The guys of NKOTB then returned to the stage singing hits including “Step By Step,” “Hangin’ Tough” and “Please Don’t Go Girl,” while New Edition performed “Mr. Telephone Man,” “Is This the End” and “Can You Stand the Rain.”

Check out over 40 pictures of New Kids on the Block and New Edition performing during the awards show in the gallery!

6 of the best snacks to pack for flights, according to nutritionists — and 4 foods to skip