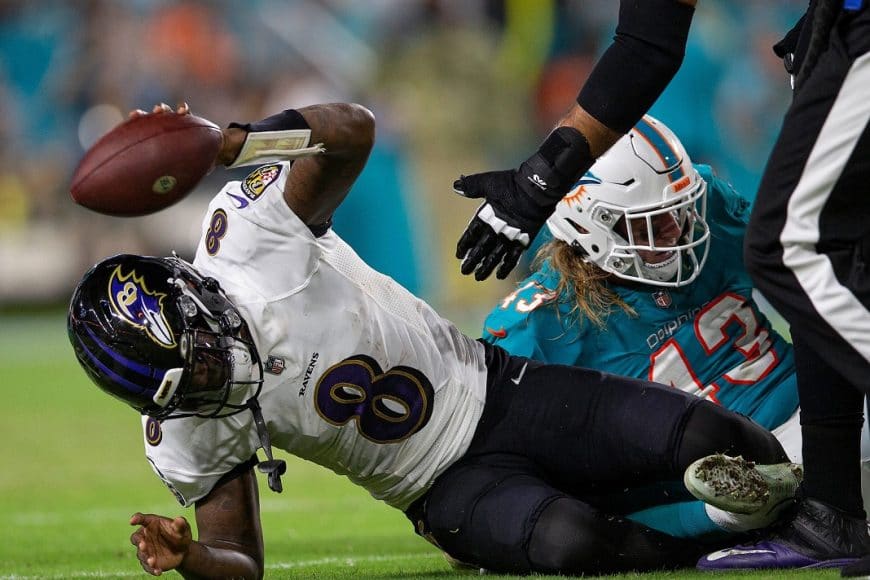 Matt Nagy has had some incredible luck when it comes to preserving his job over the past year. Last season after enduring a six-game losing streak, he encountered a stretch of schedule that included some of the worst teams in the NFL. The Chicago Bears won three in a row and snuck into the playoffs as the first-ever NFC 7th seed. Now here he is again. Loser of four in a row and sitting at 3-6. His season is on the line against the Baltimore Ravens. Most already have the visitors winning easily. That is until something happened with Lamar Jackson.

The MVP hopeful quarterback contracted some sort of illness this week and missed multiple practices. Still, he returned on Friday, and most felt he would play. That is now in doubt. Baltimore re-added Jackson to their injury report on Saturday and his status is considered “50-50.” Adding more fuel to the fire? The Ravens choosing to elevate quarterback Trace McSorley from the practice squad to the active roster.

Something they wouldn’t do if they were certain Jackson will play.

Quarterback Trace McSorley was also elevated from the practice squad for Sunday's game. Lamar Jackson is questionable due to illness. #Ravens https://t.co/HkgelmndJH

A league source on the status of Ravens’ QB Lamar Jackson for Sunday’s game in Chicago against the Bears: “I’d say it’s 50-50. He’s sick – not Covid.”

If the quarterback is indeed out? That changes the entire complexion of the game. Suddenly it would go from Lamar Jackson against Justin Fields to Tyler Huntley against Justin Fields. Huntley is a former undrafted free agent out of Utah. He’s been with the Ravens for two seasons, throwing a total of 16 passes in that span. Completing only half of them. Suffice to say Baltimore would face a far more difficult task winning in Chicago with him.

Their defense has struggled against the pass all year and Fields is playing some of his best football. Nagy may get an unbeliever reprieve if this ends up coming to pass. Beating Baltimore would set up a game against the winless Lions on Thanksgiving. In the span of less than a week, the Bears could suddenly find themselves 5-6 and back in the playoff picture. On the other hand, if they lose to Huntley? That would spell the end of this regime once and for all.

Wyoming veteran teaches others the skill of knitting

Today24.pro
Manufacturers to Benefit from Lucrative Growth Prospects in the Global Animal Parasiticide Market Turbocharger Market Size and Prediction by Leading Manufacturers According to Its Application and Types Till 2028 325 Train Food! LUXURY STEAK + CHEESE on the Napa Valley Wine Train! Santa Claus Is Comin to Town and more Christmas Kids Songs from LooLoo Kids