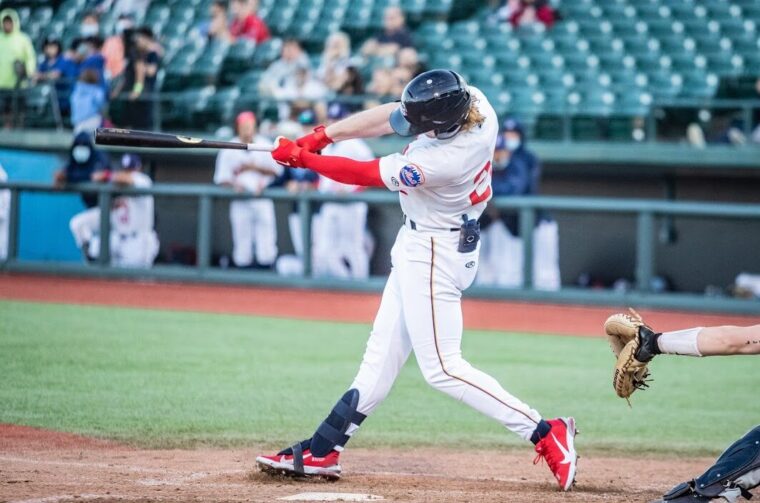 A strong start by Eickhoff and homers from Cheslor Cuthbert and Drew Jackson led Syracuse to a 6-to-3 win.

Neither Lee nor Mazeika started but they both contributed pinch hit doubles. Lee’s was an opposite field line drive which led to him scoring on an RBI single from Jackson. Mazeika’s was a line drive to right that scored Orlando Calixte from first.

Our lead is back to 3️⃣ pic.twitter.com/1zUxHwxdNB

Eickhoff made his first start since he was designated for assignment and did well, allowing only three extra base hits and one walk.

Ramirez pitched a scoreless seventh inning. In four innings with Syracuse, he now has a 6.75 ERA.

Home runs by Mangum and Luis Carpio weren’t enough to overcome Portland’s four-run rally in the sixth inning in Game 1 of their doublehader.

Vientos didn’t play in either game of the doubleheader after leaving Tuesday’s game early.

Baty played error-free defense in left field and had an infield single in three plate appearances.

Cortes hit his 25th double of the year on a flyball to left field but was stranded on second.

Mangum hit his seventh overall home run of the season and his fifth for Binghamton. It was a fly ball to left field and came as a right-handed batter.

#Mets prospect Jake Mangum (@jakemangum15) hit his 5th home run of the year for @RumblePoniesBB. He got every bit of this one. pic.twitter.com/WQP1SAJ8Xx

Grey had only given up one run through five innings before things came unraveled in the sixth inning. He faced four batters in the sixth and allowed a leadoff double, an infield single, an RBI double, a run-scoring wild pitch, and a walk.

27-year-old right hander Justin Dillon relieved Grey and allowed two inherited runners to score but nothing else in two innings of work.

Strong pitching, a solo homer from Baty, and six RBIs from Rincon led Binghamton to a lopsided win and a doubleheader split.

Baty’s home run was his tenth of the season and his third with Binghamton. He has now hit .229/.321/.414 in 81 plate appearances since being promoted.

Binghamton went into the bottom of the sixth with a two run lead before Rincon blew the game open with a grand slam. He also doubled. In 52 plate appearances since the Mets traded for him, he has hit .340/.365/.680 with four homers, a triple, and three doubles.

This one is way, way gone.#Mets No. 4 prospect Brett Baty crushes a solo shot for @RumblePoniesBB. pic.twitter.com/W6aQ7Fc8KI

Beggs had one of his better outings of the season. He hadn’t allowed any runs or extra base hits through five innings but gave up a two run shot in the sixth inning.

Alvarez pinch-hit for Zach Ashford in the bottom of the ninth with Binghamton down a run and a runner on first. Hudson Valley closer Derek Craft struck him out though.

Mauricio’s hit was a line drive single to center field. It came as a left-handed batter.

Palmer had himself a very nice game, getting on base three times and stealing his first base since being promoted to Brooklyn. His first Brooklyn hit was a line drive to right field.

Palmer also shows off the wheels, taking second base with ease putting himself into scoring position. First hit and first stolen base at the High-A level come in the bottom of the third. pic.twitter.com/jUmmaUTcxq

Opp had another strong start. After getting off to a dreadful start after he was promoted to Brooklyn, he has now given up only five runs (two earned) in has last 14.2 innings pitched.

Young, Guerrera, and Drake Osborn are three 2021 draft picks who made their professional debuts on Wednesday.

Out of the six pitchers the Mets used on Wednesday, Colon and lefty Cristofer Dominguez were the only ones who didn’t give up any runs.