A CLUSTER of coronavirus infections has formed in the North of England as cases of the Indian variant continue to spread.

Data from Public Health England (PHE) states that 43 per cent of places have seen a rise in cases and this interactive map reveals if your area is one of them.

Yesterday the UK Covid cases hit 3,000 for the first time in a month sparking calls for tighter restrictions.

It comes as the Indian variant continues to spread across Britain with hotspots facing chaos this week over bungling Government rules.

The North of England continues to be a hotspot for the variant despite extra measures being rolled out in places such as Bolton and Blackburn with Darwen.

Over the seven days to May 22 there have been five areas that have seen a rapid increase in cases – four of which are in the North of England.

It is also the area with the second highest in infection rate in the country. 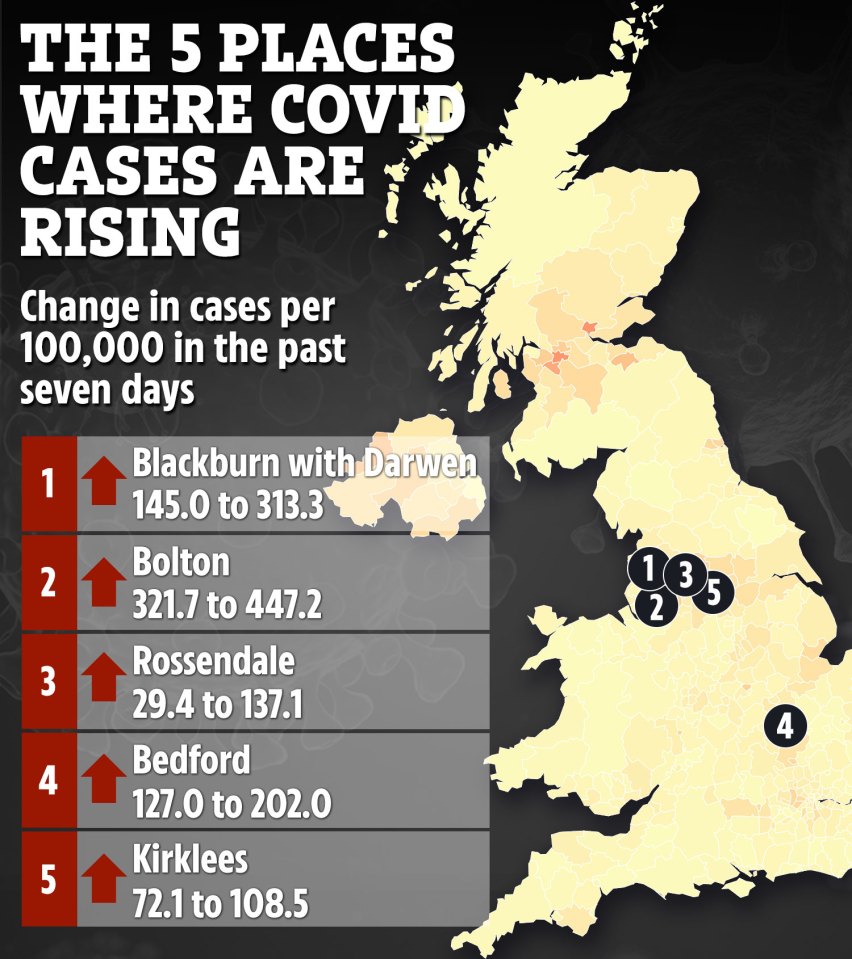 Bolton, also in the North West, has seen cases rise from 321.7 to 447.2 and currently has the highest infection rate in the country.

Rossendale, in Lancashire has witnessed a big jump in infection rates going from 29.4 to 137.1.

Schools across England have been testing pupils and one school in Rossendale was forced to close due to an outbreak.

Haslingden High School and Sixth Form has seen a “considerable” increase in the number of infections being detected in students.

The school has been liaising with public health chiefs at Lancashire County Council who advised the school be closed.

The only area that isn’t part of the cluster of cases detected in the North is Bedford in the East on England.

Bedford is number four when it comes to areas that have seen the largest week on week increase in cases after infections rose from 127 per 100,000 to 202.

People in the area have been told to “minimise” travel in order to stop the spread of the Indian variant.

The Department of Health and Social Care had previously issued guidance for eight areas of England – but insisted that there were not local lockdowns.

Kirklees in West Yorkshire is the fifth place where cases have seen a significant spike, going from 72.1 to 108.5.

While these are areas where cases have risen the most in the last five days, there are other areas in the North of England that have high infection rates and are in the top ten of the most infected areas in the country.

The cluster in the North can also be seen in data from the government’s coronavirus dashboard.

It states that on a daily basis, 745 people are testing positive for coronavirus in the North West.

This is followed by 355 daily infections in Yorkshire and the Humber.

In London, 323 infections are being reported a day and then every other region currently sits below 300 infections a day.

In the South East 250 people are testing positive daily, 197 in the West Midlands and 164 in the East.

In the East Midlands, 163 people are testing positive on a daily basis, in the North East, 92 and the South West has the lowest rate with 75 infections daily.

An electronic notice board in Bolton town centre, one of the areas of the UK where the Covid variant first identified in India is spreading fastest[/caption]

People under 21 might be MORE vulnerable to Indian Covid variant, expert fears

While there is a cluster of infections in the North, there are some areas where infection rates remain low.

In the last seven days Ryedale in North Yorkshire has recorded no new coronavirus cases, down from just one case seven days ago.

Worthing in Sussex has also recorded no new cases, down from 12 cases.

The areas with the lowest infection rates include Mid Sussex, Eden and East Suffolk.