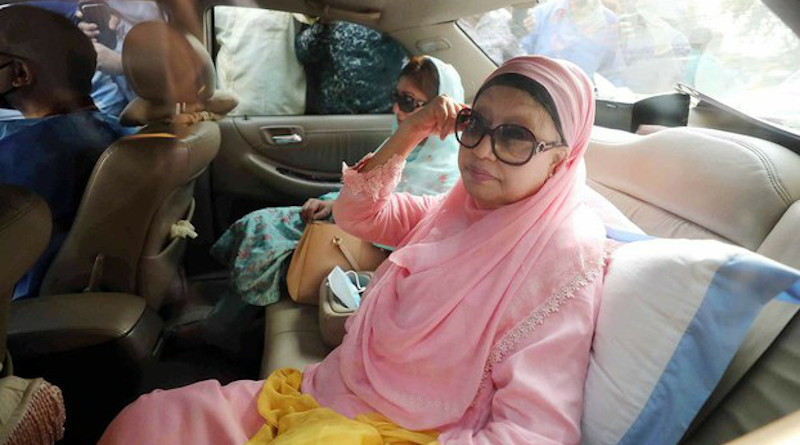 The Bangladesh government has extended the home confinement of opposition leader and three-time Prime Minister Khaleda Zia by suspending her jail sentence for another six months, government officials announced Tuesday.

The extension is the first since March when Zia left Bangabandhu Sheikh Mujib Medical University Hospital, where she had been for nearly a year after being confined at the Old Dhaka Central Jail.

“Our prime minister today extended the tenure of Khaleda Zia’s release by suspending her sentence for six more months. The order has already been made. She is likely to be outside prison until March 24, 2021,” Home Minister Asaduzzaman Khan Kamal told BenarNews on Tuesday.

He said the conditions of Zia’s release would remain the same – the 75-year-old can leave her home only for medical treatment.

The chairwoman of the opposition Bangladesh Nationalist Party (BNP), Zia was sentenced to 17 years in prison following two trials on corruption charges filed by the Anti-Corruption Commission in 2007.

On Feb. 8, 2018, a Dhaka court convicted Zia on charges that she had embezzled foreign donations intended for the Zia Orphanage Trust, and sentenced her to five years in prison. She was incarcerated an old jail in the historic quarter of the city where she was the only inmate.

The trust was named for her late husband, Ziaur Rahman, who had founded the BNP in the late 1970s and became the country’s president in 1977. He was killed by an army assassination squad during a coup while staying at a government rest house in Chittagong.

In response to an appeal of Zia’s sentence by the corruption commission, the High Court later increased it to 10 years. Then, in October 2018, a Dhaka trial court sentenced Zia to an additional seven years on corruption charges linked to the Zia Charitable Trust.

Authorities moved Zia from her jail cell to the hospital in April 2019 amid concerns about her health. She has suffered from diabetes, arthritis and other age-related complications, according to physicians.

On March 25, dozens of supporters showed up at the hospital and jostled to get close to Zia as she got into a car to head home. Home Minister Khan praised Prime Minister Sheikh Hasina for allowing her bitter rival to be released from custody on humanitarian grounds.

Zia and Hasina are the only women to serve as Bangladesh’s prime minister. Zia led Bangladesh three times and served in the parliament as the leader of the opposition twice. Hasina was elected to her fourth term in office in 2018.

On Tuesday, lawyer Muhammad Jamiruddin Sircar, a member of the BNP standing committee, thanked Hasina’s ruling Awami League government for extending Zia’s release, but said he wished that she had more freedom.

“Madam’s health condition is very bad. She is an old lady and she needs proper care. I thank the government for extending her release,” he told BenarNews.

“I think the government should allow her to go abroad for better treatment and reunite with her family members,” said Sircar, a former speaker of Bangladesh Parliament.

Zia’s only surviving son, Tarique Rahman, was arrested on corruption charges in 2007 and has been living in London.

A political science professor, meanwhile, said the government wants to be careful in its treatment of Zia.

“The people’s perception is that Khaleda Zia is seriously sick, and that is why the government released her from prison,” Chittagong University professor Nizam Uddin Ahmed told BenarNews. “She has abided by all conditions set for her release from prison so the government does not want to take any measure that would create public sympathy for her.

“The government enjoys political advantages by releasing Zia from prison with conditions that she cannot participate in politics, go abroad or make political or public statements,” he said.