SEANN Walsh wrapped up warm as he arrived back in the UK after competing in I’m A Celeb.

The star covered himself up in a khaki tracksuit as he made his way through Heathrow airport early in the morning.

The comedian made the 10,000 mile long trip to Australia and back to compete in the ITV jungle.

But Seann, 36, was all smiles as he touched down in blighty alongside his pregnant girlfriend, dance teacher Grace Adderley.

The pair have been in a relationship since 2019, and Seann was spotted tightly holding her hand as he made his way through the plane terminal.

He chose a head to toe matching khaki AllSaints hoodie with jogger trousers as he touched down at sunrise. 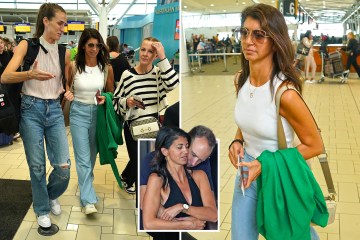 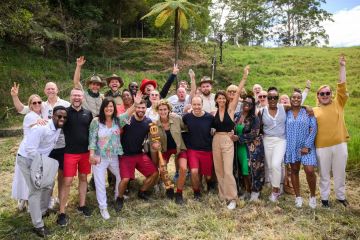 The comedian completed the outfit with bright pink sunglasses and black, white and turqoise Nike sneakers after catching his overnight flight.

Seann cut as casual figure as he held his girlfriend’s hand whilst thick black noise cancelling headphones that lined his neck at 6:55am this morning.

Grace looked cosy as she covered up in a bright orange robe coat, with black joggers and white trainers.

She opted for a small black leather shoulder bag with a gold chain stap which rested on her left shoulder as she strutted through Heathrow.

The pair have been together since 2019 after his relationship with actress Rebecca Humphries ended after photos emerged which showed him kissing Strictly professional Katya Jones in 2018.

The comedian came in fifth place, walking out of the jungle two days before the final, in which Jill Scott stormed to victory.

He took part in several of the trials across the series including Beastly Burrows, Partners in Grime, Grot Yoga where 24 stars for camp were won.

Five DWP benefits to be scrapped by the end of 2024 - are YOU affected?

During his jungle stint, Senn recieved public backing by fellow comic and his ex-girlfriend Emily Atack on social media.

The Inbetweeners star, 32, took to her Instagram page to plead with fans before the first campmate to leave the ITV show was revealed.

Emily and Seann, 36, who dated in 2016, have remained close following their break-up, and are often seen together on lunch catch-ups.

Why We Hate Being Scammed