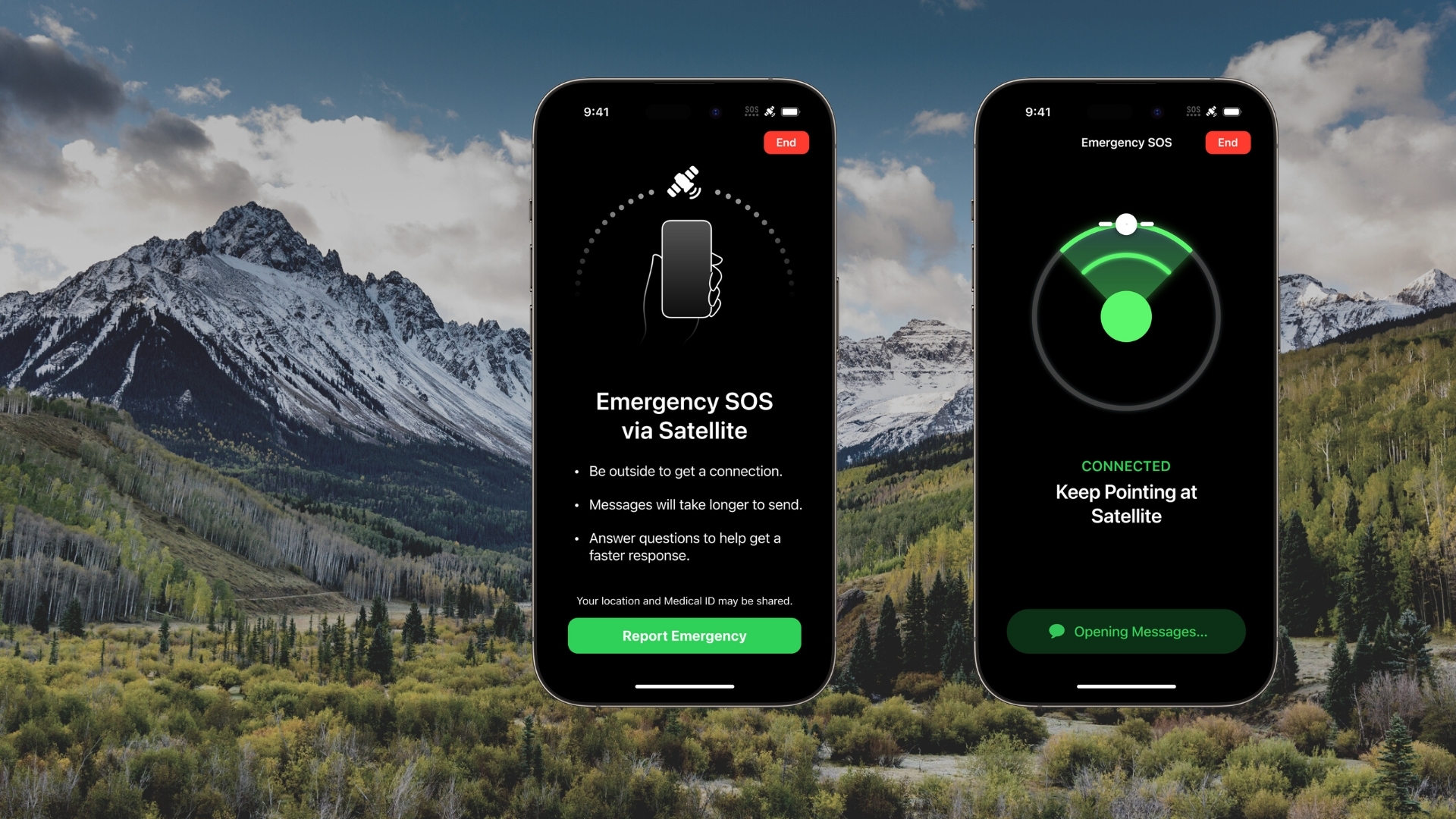 In partnership with Globalstar satellite communications company, the feature uses satellite connectivity to put people in touch with local emergency dispatch centers if there is no cellular or Wi-Fi coverage. If you're in an emergency, your iPhone 14 pings one of Globalstar's 24 low-orbit satellites. The satellite will then send the information to one of its ground stations, which routes the call to a local dispatch center or relay center if the dispatch center is unable to receive 911 text messages. These relay centers consist of third-party and Apple-employed specialists who are trained in emergency protocol to communicate with dispatchers and relay the information back and forth.

SEE ALSO: The Apple Watch Series 8 is all about saving you from mortal peril

Testing this feature out is a bit of a catch-22. Apple hopes you're never in an emergency where you have to use it, and it really doesn't want you testing it out when you're not in an emergency. Did you know prank calling 911, which is essentially what you'd be doing, is a felony? (Yeah, Apple doesn't want you doing that.) That said, the best time to learn how to use Emergency SOS via satellite is when you're not in an actual emergency. When facing mortal peril, the last thing you need to deal with is scrolling through your settings to find the feature. So Apple has developed a demo mode for users to test it out in a non-emergency situation.

Mashable was able to demo the feature in a controlled environment, and we're going to share how it works.

How to activate Emergency SOS via satellite

You'll find this feature when you call, text, or use Siri or Crash Detection to contact 911 in an area where there's no cellular service or Wi-Fi. It can also be activated via Fall Detection with Apple Watch if you have it set up to route emergency services through your iPhone.

Emergency SOS via satellite is prepared to activate when the SOS icon appears at the top right-hand corner of the screen, which indicates there's no cellular/Wi-Fi connectivity and satellite service is available. A combination of hardware and software components power the feature, which is why it's only available on iPhone 14 and iPhone 14 Pro models.

You activate the feature by dialing 911. When the call doesn't go through because there's no connection, the green circular icon at the bottom right of the screen will read, "Emergency text via Satellite." Tap this icon to activate the feature. It's important to note that because the feature is messaging a satellite, there is going to be a latency. Apple says it takes about 15 seconds for a message to be sent and could take up to a minute if you're under some trees with foliage. 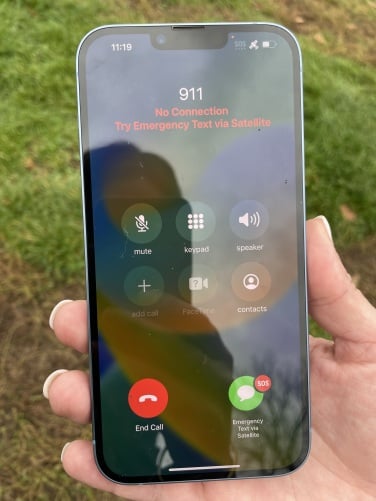 Access the feature when you try to dial 911 in an area without cellular connectivity. Credit: Apple 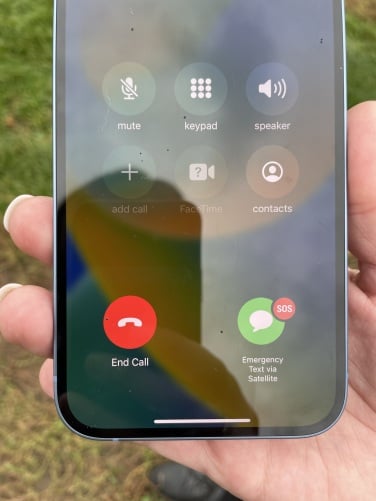 A close-up of how to activate Emergency SOS via satellite. Credit: Apple

The next screen gives you information about using the feature: You need to be outside to get satellite connectivity, messages will take longer to send, and you'll need to answer questions to get a faster response. At the bottom of the screen, tap "Report Emergency" to start communicating with emergency services. As of this moment, emergency services is notified. 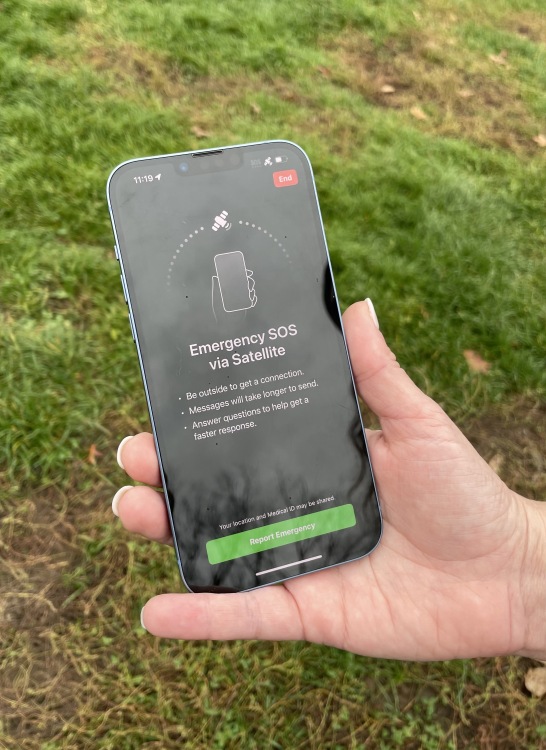 Now it's time to describe your emergency. Credit: Apple

Provide details about the emergency

Next, the feature will ask you a series of questions to gather information about the nature of the emergency. Remember: If you are unable to fill out the report, as long as you have made it to this step, emergency services will be notified regardless. For the purpose of the demo, it helped to come up with a specific emergency situation, so I imagined I had broken my leg while hiking in a remote mountain range. (For the record, I am not trying to manifest that energy.) The report asks you to specify from a list of common emergency scenarios which best applies. 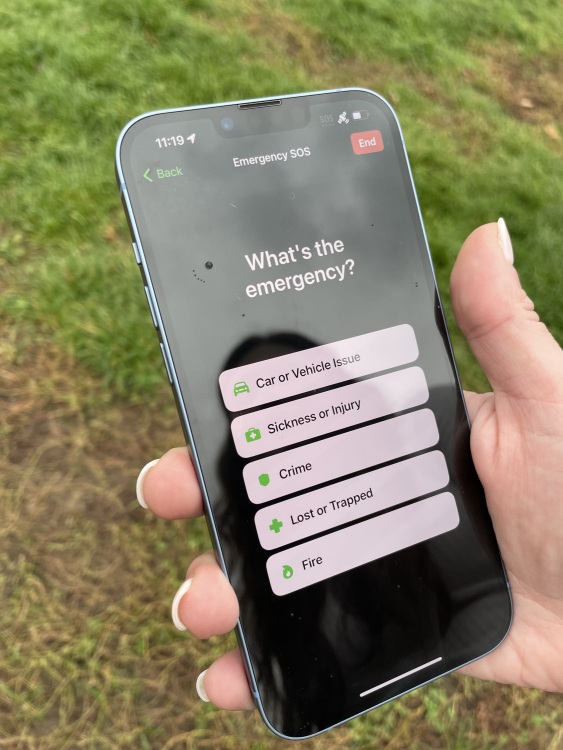 The next screen asked for more details about my imaginary accident, like "who needs help?" and "how are you breathing?" and "what best describes the emergency?" I specified that I was the one injured, didn't have any trouble breathing, and chose "traumatic injury" from the list of options. 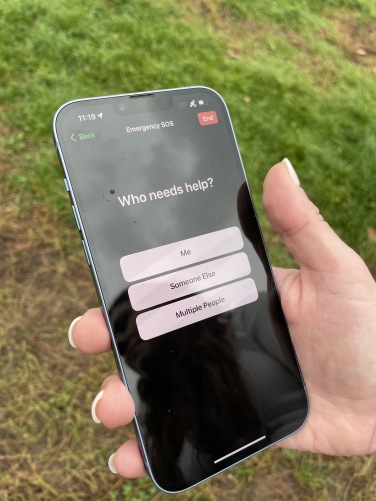 Asking for me or a friend? Credit: Apple 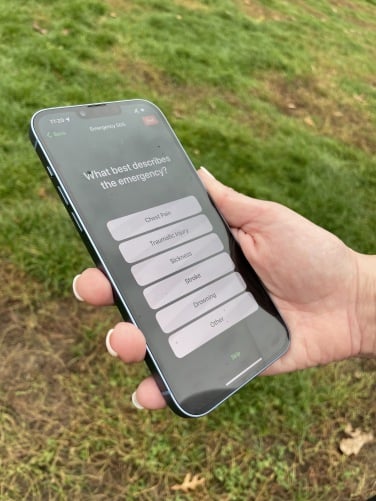 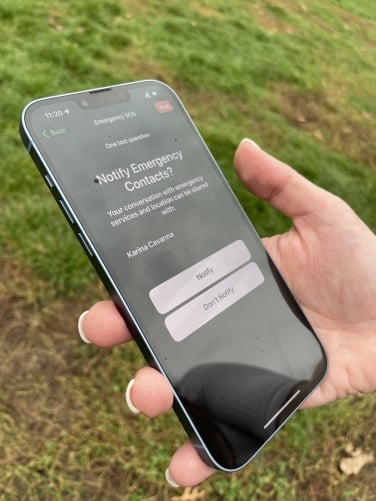 You need to have already filled out your Medical ID for this feature to work. Credit: Apple 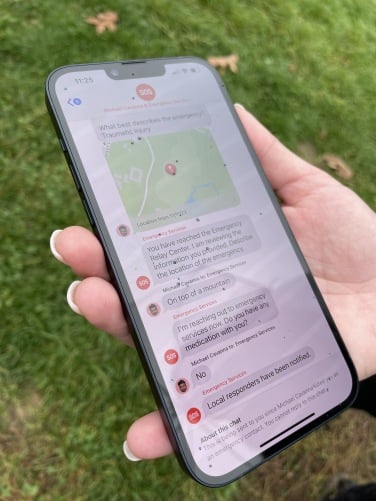 Your emergency contacts can follow you in real time. Credit: Apple

Texting with emergency services via satellite

Once all of the details of the emergency were sent, which included my medical information and location, a new conversation was created with the relay center responding to my request. A status bar at the top of the screen showed that the iPhone was still connected and reminded me to keep pointing the phone in the same direction to remain connected. After about 30 seconds, I received a text from the relay center asking me to describe my location and if I had any medication with me (because the Medical ID had been filled out to say I took medication).

SEE ALSO: Crash Detection on Apple's iPhone 14 can be triggered by rollercoasters 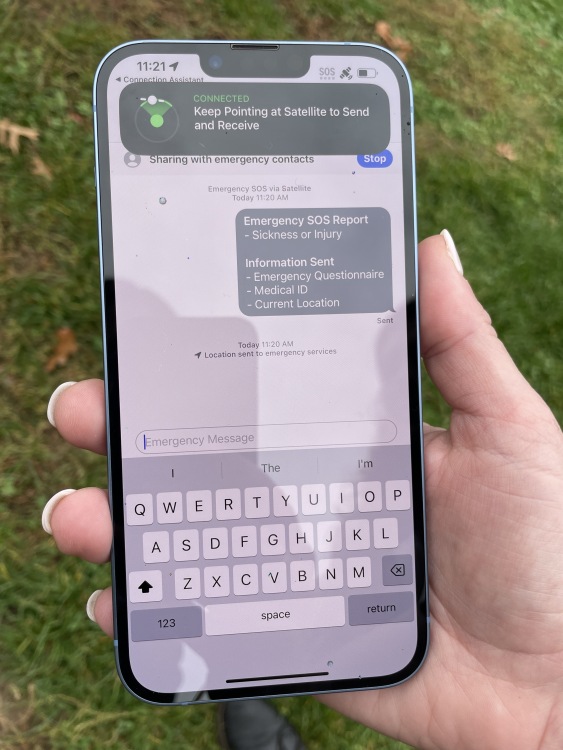 Sending and receiving texts via satellite can take between 15 and 60 seconds. Credit: Apple

After answering these questions, I received a text saying local responders had been notified. This is when you wait and hope help is on the way. You can also stay connected to the relay center, but that's a personal preference. 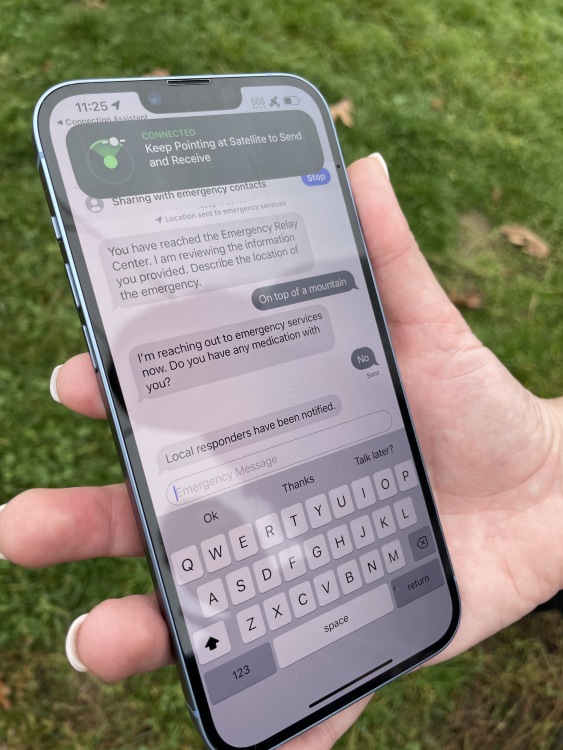 The text will notify you when help is on the way. Credit: Apple

If you want to be extra prepared, you can test the feature for yourself in demo mode. Access this by going to Settings, then Emergency SOS, and tapping Try Demo. The demo will temporarily disable your cellular connection and connect to a real satellite to walk you through the feature. This is so you can get a realistic sense of where to position your phone and understand the latency time to send and receive messages via satellite. It's also a good way to know what questions to expect if the unthinkable happens. 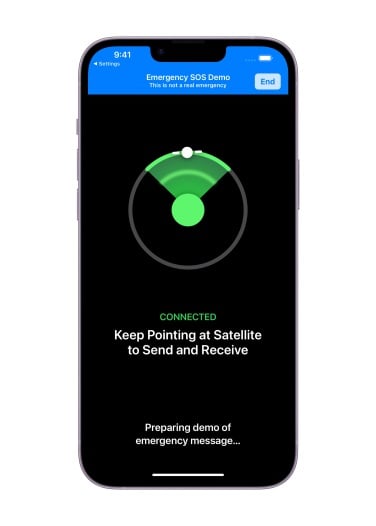 Demo mode allows you to test it out so you can know what to expect. Credit: Apple 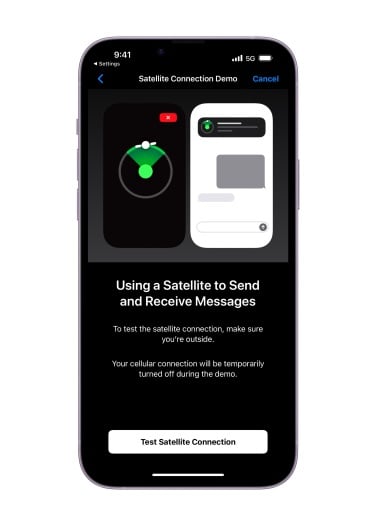 It's a useful way to understand the latency and emergency questionnaire. Credit: Apple

Between Fall Detection, Crash Detection, and now Emergency SOS via satellite, Apple is really concerned about its users' safety. Would I feel better knowing that I have this feature at my fingertips on a hike or even driving through a dead zone in a remote area? Absolutely. It increases the likelihood that I'll be able to get help.

That said, it's a lengthy process that requires me to complete a lot of steps in order to get the help I need. It follows a similar emergency protocol conversation that a 911 dispatcher is trained to follow, so it isn't much different than that, but something about tapping and texting in a crisis feels like more of an obstacle to overcome — especially if I'm physically incapacitated.

It's a lengthy process that requires me to complete a lot of steps in order to get the help I need.

There's also the privacy issue. Apple says your messages are sent to the satellite in an encrypted form and then decrypted by Apple to send to the emergency dispatcher. It also says your messages may be saved by emergency services and relay centers "to improve their services." It's not unlike the privacy risk of a typical 911 call, which is considered public record (access to such records depends by state). Still, before using this feature, you need to consider the fact that your information could be retained.

It's something to keep in mind, but even for a privacy advocate, it's an exception you might be willing to make in an emergency.

Retailers try to curb theft while not driving away customers