Already a month into the 2022-23 NBA season, we’ve seen some massive star power around the league, and the MVP race is wide open.

The likely frontrunners are Luka Doncic, Jayson Tatum, and Giannis Antetokounmpo. There are cases to be made for all of Stephen Curry, Kevin Durant, Nikola Jokic, Ja Morant, Devin Booker, Donovan Mitchell, and (especially of late) Joel Embiid.

But it is already time to include Oklahoma City’s Shai Gilgeous-Alexander in those conversations, too. The dude is one of the most fun players to watch in the NBA. You can tell that he grew up watching and idolizing Allen Iverson.

SGA is an improv show. Every bucket is something different. Trying out new material on one of the league’s best defenses like it’s the Sunday 9 AM run at the park.

Gilgeous-Alexander is currently reaching thresholds of 31.0 points, 4.0 rebounds, 5.0 assists, and 2.0 steals per game. The only players to finish the season accomplishing all of those in the same season: are Michael Jordan, Allen Iverson, and James Harden (when he won MVP).

Add in thresholds of at least one block per game as well, which Gilgeous-Alexander is currently achieving, and you’ve got just two seasons in which M.J. won MVP.

Before we get too hyped, though, let’s address the elephant in the room.

Since the 1975-76 season, only three players in league history have won MVP in the same season in which their team did not win 50 games. The latest projections have Oklahoma City between 28 wins (via ESPN) and 30 wins (via FiveThirtyEight).

How could we possibly give an MVP award to someone on a losing team? Let’s ask JJ Redick. (Warning: This clip contains language not safe for work.)

"You're missing a f**king show if you're not watching Oklahoma City with Shai in the lineup" – @jj_redick pic.twitter.com/uSVqpplkvB

One could argue that what Gilgeous-Alexander is doing does not translate to winning, but it’s not true. The Thunder have actually outscored opponents by 3.1 points per 100 possessions when the former Kentucky star is on the court. That is around the same as Doncic (3.5) and better than Durant (1.1).

Oklahoma City is scoring an additional 9.1 points per 100 possessions when Gilgeous-Alexander is on the court relative to when he sits, per PBPStats. Is it really fair to judge him because the Thunder cannot score when he sits?

Gilgeous-Alexander has played thirteen games so far this season. He has scored at least 30 points in nine of those appearances, and he has only failed to notch 20 points once thus far. He scored at least 37 points in three of his last four games.

I mean…. just watch Shai Gilgeous-Alexander against the Celtics.

The Celtics said this is the first time they had to double team a player this season… and it's easy to see why.

The variety of difficult shots is unbelievable. pic.twitter.com/6kTLYp9O4l

Watch his highlights and you will see elite footwork, and perhaps the best stop-and-go, herky-jerky style of play in the league. He keeps his defenders guessing, and they have absolutely nothing to stop him from scoring.

So how exactly is Gilgeous-Alexander able to accomplish this?

The answer is that he is doing that by him–self. The numbers are wild to consider. Self-created opportunities are when the player held the ball for at least 2 seconds before the shot. 88.2 percent of his field-goal attempts are self-created, the most of anyone in the league (min: 60 attempts) except for just Luka Doncic, per PBP Stats.

Shai Gilgeous-Alexander with a season-high 39 points last night. Now 5th in the NBA at 31.6 PPG behind only Luka, Steph, Mitchell and Giannis.

SGA is #1 on drives per game with 24.8. Completely unstoppable. Elite stop and go. Hesitations. Touch with either hand. SGA has it all. pic.twitter.com/JQsqVYzmeO

Gilgeous-Alexander leads the league in total points on unassisted 2-pointers so far this season. Doncic, meanwhile, is the only player in the NBA who has scored more unassisted points at the rim.

He is currently averaging 24.0 drives per game, which is just shy of the record for the most among any player since the league began tracking as much in 2013. The previous records were Gilgeous-Alexander during the 2020-21 campaign (25.2) and Gilgeous-Alexander last season (23.9).

For comparison, the Warriors averaged just 23.9 drives per game during the season in which they won the championship with Kevin Durant and Stephen Curry in 2018.

SGA with the steal and slam

Gilgeous-Alexander also grades out as a considerably better defensive player than Booker and Mitchell, and he currently leads the Western Conference in steals per game.

He has turned many of those possessions into scoring opportunities, and Gilgeous-Alexander leads the league in transition scoring. In fact, if that continues by the end of the season, it would be the first time someone other than Giannis Antetokounmpo was able to wear that crown since 2017-18.

At the end of the day, it is far more likely that Gilgeous-Alexander winds up as a no-doubt first-time All-Star and likely All-NBA recipient before entering the NBA’s actual MVP conversation.

Who knows if any of this is sustainable? But based on what we have seen from him in Oklahoma City so far this season, it’s time to start the chatter — because he’s that special.

Shai Gilgeous-Alexander's 'I'M HIM!' after clutch logo shot is the best new reaction 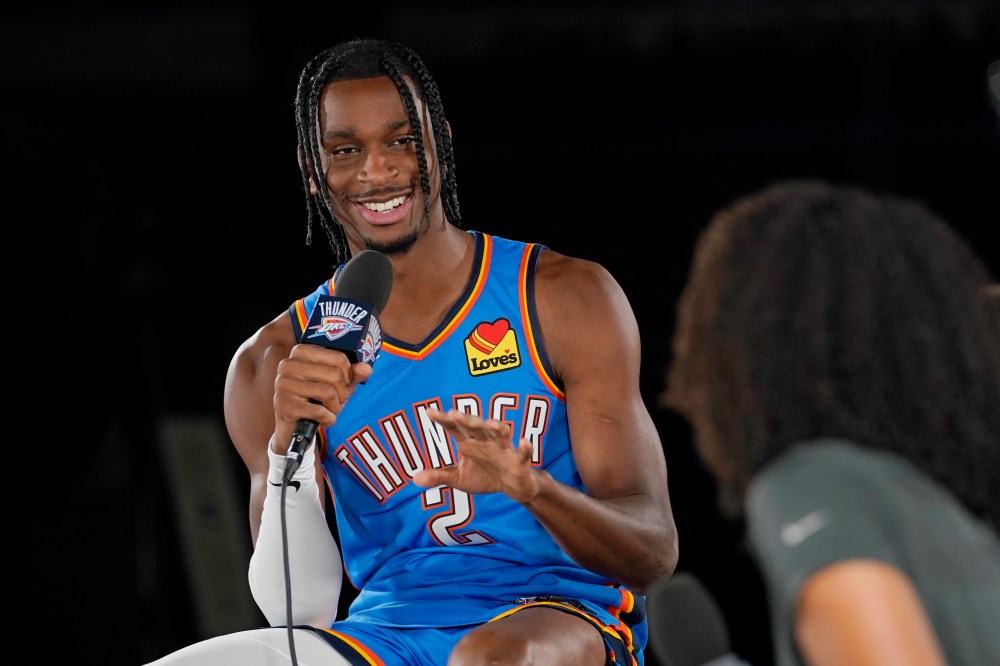 Mastodon's soaring user base has dipped