IT’S only been three months since we bid farewell to Neighbours, and already the once lively set looks shabby and derelict.

New photos show old props and scripts lying abandoned, while the once inviting pond by The Waterhole Pub has turned green.

The Aussie soap was set in Erinsborough, a fictional suburb of Melbourne, and places like Harold’s Cafe and once-grand Ramsay Street homes are being overrun with weeds and litter.

It’s not uncommon for filming locations of long-running shows to be left to rot, should the production cease or move to an alternative place.

Here we look at other TV ghost towns that have been left behind – from the derelict old Albert Square to the crumbling former Coronation Street set. 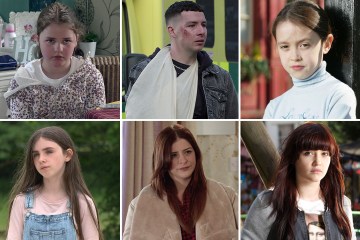 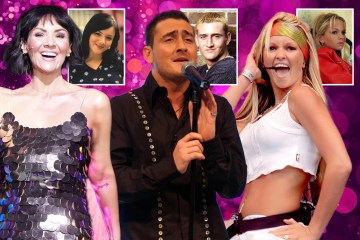 Earlier this year the BBC1 soap upped sticks from its old set to move to a new £86.7million location at the Elstree Centre in Borehamwood.

The show’s original one was built in 1984 from steel frames, plywood and plaster brick panels, and was only intended to be used for two years.

It was stopping EastEnders from being filmed in HD because bosses worried viewers might notice the fronts of the Queen Vic and its surrounding buildings were made of plaster and plywood.

The interior of the old Queen Vic is a complete mess with items thrown on the floor[/caption] The outside of the Minute Mart looks perfect but the inside is a different story[/caption] Inside the Minute Mart, the plywoodwalls are on show as it’s been stripped out[/caption]

The original Queen Vic pub has been left to gather dust – with a token dirty pint glass still sitting on the bar.

While the Minute Mart looks perfect from the outside, inside it’s a different story as everything inside has been cleaned out.

Kath’s Cafe has also been gutted, leaving behind marks on the wall and floor where props have been stripped.

In 2013 Coronation Street upped sticks to another location in Manchester, taking with it everything they could – leaving behind only a cracked Corrie mug.

Eerie photos snapped by The Urban Collective show the decimated set where the Rovers Return used to stand tall ahead of its demolition in 2018.

The backs of the red brick terraced houses, which were constructed in 1968, are now covered in ivy, with the railway viaduct the only recognisable monument.

The soap is now filmed in Salford Quays in part of the Media City complex.

Channel 4‘s Brookside, which began in the 1980s and featured the first pre-watershed lesbian kiss, was filmed on a real-life cul-de-sac in Liverpool.

When the series ended in 2003, the set was left to fall to wrack and ruin.

Photos showed weeds growing between pavement slabs and the iconic Brookside sign missing from its posts.

The set was bought at auction in December 2008 by an anonymous buyer and three years later it was painstakingly restored.

The sign has been replaced and the houses given a facelift with new brickwork and wood, while internally they’ve been rewired and plumbed.

It also finally has real-life residents living it in – leaving fans of the former soap delighted.

Police drama The Bill ran for 27 years and was the longest-running serial drama in the UK when it came to an end in 2010.

It was filmed in different locations across London, but its iconic Sun Hill Police station was in the borough of Merton, south London.

The abandoned building kept the famous sign out front but it was covered by a piece of tarpaulin.

The old Merton Studios site has now been made into housing, while neighbouring Wimbledon Studios remains fully functioning.

Earlier this year it was reported a reboot of the police drama is in the pipeline.

What rights does the Respect for Marriage Act protect?

Today24.pro
One of The Greatest Britons in History - Joe Calzaghe ‘How many Uber drivers does it take to pick up a disabled person?’: Disabled person says 3 Uber drivers canceled on them because of their service dog I make $1,000 a month by promoting Amazon products on social media. It only takes 5 hours per week — here's how I set up my side hustle. Crypto Lender Matrixport Raises Valuation to $1.5B Despite FTX Collapse