LEWIS HAMILTON is confident his working relationship will thrive with George Russell in 2023.

The Mercedes team-mates have endured a tough season after being dealt with an underperforming car in the first half of this season.

However, a recent upturn in form led to Russell landing his team’s first race win of the year – and the first of his career – in Brazil on Sunday.

Hamilton, 37, has just one chance left to end his barren run – he has claimed at least one chequered flag in all of his seasons in F1.

But after seeing his fellow Brit claim victory at the weekend as he finished second, Hamilton believes the pair will cope with future problems.

The seven-time world champion said: “I’m a lot older and I’ve been with the team so long. 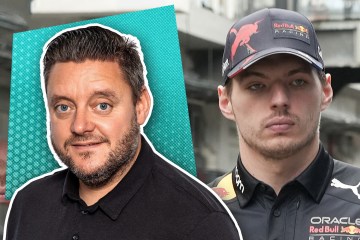 “So managing whatever challenges we come up with moving forward, we’ve been through so much that I don’t think it’s going to be a problem.”

Hamilton added: “I’ve seen what he did at Williams.

“I think naturally you have to say it’s impressive what he’s done this year, the consistency he’s had, how he’s arrived and just hit the ground running.

“It’s not like he arrived in a completely brand new team.

“The previous couple of years he was sitting right behind me watching the work that I was doing with the engineers, with Riki (Riccardo Musconi), who is now his number one.

“It’s been super easy to blend in.

“He uses my steering wheel, and he’s obviously got to do the test days prior to the year, so I think he’s just blended in perfectly and he’s been a positive force in the team.

“He’s helped keep the equilibrium in the team, in terms of the working relationship I think it’s strong.”

Russell, 24, enjoyed a perfect weekend as he claimed the victory in the sprint and also the fastest lap.

It was an emotional weekend for the King’s Lynn ace who was in tears within seconds of crossing the line in Sao Paulo.

Reflecting on his first year in the Mercedes car, Russell said: “In some ways I’ve felt like a bit of a rookie this year because the level at which this team operates on is a level that I’ve never experienced before, and I’m talking about things that I’d never even heard of in F1 before.

“That took me some time to learn and understand how to get the most out of the team, out of the car.

“The capability within this team is huge and the potential is huge, and learning to use all the resources at our disposal to bring more performance, is a lot more than I’ve ever been used to and it took me a little bit of a while to wrap my head around that.”

Russell and Hamilton go to Abu Dhabi for the final race of the 2022 season hopeful of overtaking Ferrari into second in the constructors’ championship.

Russell is fourth in the driver standings, 25 points behind Charles Leclerc and Sergio Perez who are tied on 290.

Another race win and fastest lap would see the Brit overtake the Ferrari and Red Bull men into second if they both fail to pick up any points.

Next phase of Ropewalks revamp to begin