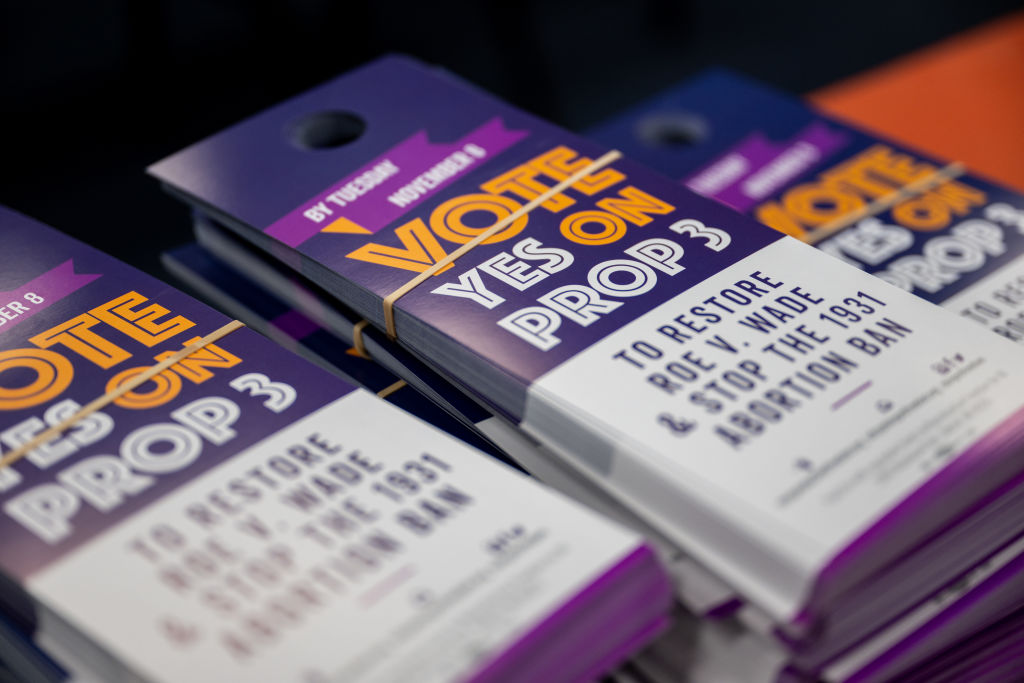 In five states on Election Day, voters weighed in directly on various ballot measures involving abortion. The states had vastly different politics, ranging from liberal California to religious, conservative Kentucky. The language on the ballot differed dramatically state by state. Some measures would have inserted a broad-ranging affirmative right to abortion into a state constitution; another would have required medical care for infants “born alive,” such as in cases of failed abortion. But all the measures had one thing in common: The abortion-rights position won in each case.

For Families United for Freedom, a new political action committee founded in the aftermath of the Dobbs decision in June, the wins served as proof that the best way to try to restore the reproductive rights once guaranteed by Roe v. Wade was at the ballot box.

Families United for Freedom spent over $1.7 million in four of the six states with abortion ballot measures this cycle — Kansas, Kentucky, Michigan and Montana. (There were also ballot measures in the safe Democratic states of California and Vermont.) The group partnered with local grassroots organizations to protect abortion rights, providing them with polling and strategic advice. The group was driven by a simple thesis: When given the option, voters in red and purple states will support abortion rights at the polls — if the issue is divorced from partisan politics. On Election Day, that thesis proved to be mostly correct.

The initial test of whether ballot measures in defense of abortion rights could be more popular when put to the voters directly came in Kansas, a red state, in August, soon after Dobbs. Voters there weighed in on a constitutional amendment that would have allowed the state legislature to restrict abortion in the state. The amendment, which had been put on the ballot before the Supreme Court’s decision and timed to coincide with the primary elections in a deep-red state that no Democratic presidential candidate had carried since Lyndon Johnson, failed overwhelmingly.

In that campaign, FUF contributed $600,000 to the local group Kansans for Constitutional Freedom, which coordinated abortion-rights efforts in the campaign.

That initial win molded Families United for Freedom’s thinking and approach, Rachael Bedard, the group’s executive director, told POLITICO. “I think Kansas is this really important case study in a red state with lots of folks who self-identify as Republicans and independents showing up to vote,” she said. Those voters supported abortion rights far more than anticipated, Bedard said, because the modeling had not been adjusted to reflect how political attitudes on abortion rights had changed in the aftermath of Dobbs. 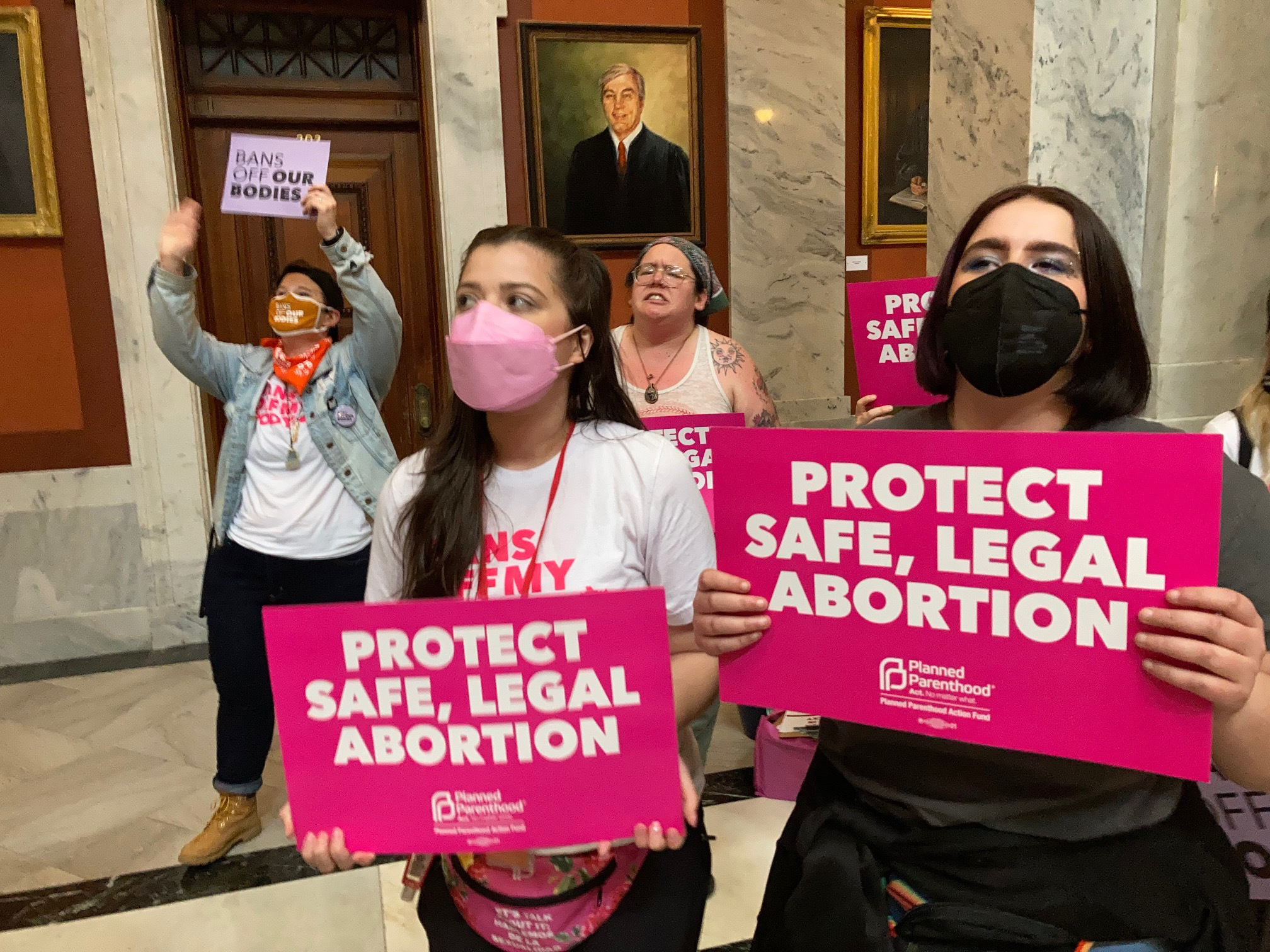 Ashley All, a longtime Democratic political operative in Kansas who ran Kansans for Constitutional Freedom, the local group that partnered with FUF, has since become a senior adviser to the PAC. Kansas voters, All said, value personal liberty and the freedom to make health-related decisions for themselves. “That is something that is not a partisan value,” she said. “It’s a core American value. And that was something we found that resonated across the political spectrum.”

It was that message — “protecting constitutional rights and your freedom to make decisions about your own body,” as All characterized it — that the group found resonated with voters more than any other one. It was the one that appealed the most not just to swing voters but to the most progressive ones as well. “Voters can have diverse personal views on abortion and still share the fundamental belief that women should have the constitutional right to make their own decisions,” All said. “That is the definition of ‘pro-choice,’ whether voters label themselves that way or not.”

The campaign in Kansas appealed to the various political views that could inform an abortion-rights perspective by sounding libertarian and conservative tones in ads. Kansans for Constitutional Freedom ran an ad describing the amendment as “an overreaching government mandate.” It featured a photo of a business establishment with a sign mandating masks on doors while the words “ANOTHER GOVERNMENT MANDATE” flashed across the screen.

In Kansas, it wasn’t just messaging. Part of the ballot measure’s success was due to the fact that voters in Kansas just aren’t that anti-abortion. “Republican primary voters have a well-earned reputation for being very pro-life,” said one Republican operative who worked on the issue and was granted anonymity to speak frankly.

“But that’s almost a signifier, and not where most folks stand on the issue.”

Instead, the operative said, voters tended to have relatively nuanced positions on the issue. A typical Republican voter might think “I trust my representative not to take it too far to a complete ban, but I don’t trust those guys out [in the western part of the state],” the operative said. And these Kansans had reason to fear the extreme end of the spectrum when it comes to abortion bans, given the near-total bans in the neighboring states of Oklahoma and Missouri.

Dealing with the issue of abortion via direct democracy flipped the debate, he said. The operative noted that college-educated voters and women often need to justify to themselves their reasons for voting for the party of Donald Trump. “The economy is the permission structure to vote Republican for those college-educated voters,” he said. “For women, it’s the economy and public safety.” Voting for abortion rights on a separate measure means that these voters aren’t asked to consider these other issues at all.

Ethan Winter, the research and strategy director at FUF, echoed this. He found that the Republicans most likely to break with the party on abortion ballot questions were “younger Republicans, women and those with college degrees.”

One key question on Tuesday was whether abortion as an issue on the ballot was a benefit for Democrats. There are some indications it was energizing among likely Democratic voters: In Michigan, registrations among women and young people after the Dobbs decision surged, for instance. In that state, the abortion ballot measure did seem to deliver benefits to Democrats; its results ran only slightly ahead of those of statewide Democrats. With over 95 percent of the vote reported, the constitutional amendment received 57 percent of the vote, while incumbent Democratic Governor Gretchen Whitmer was at 55 percent.


But this apparent boost to Democrats wasn’t a sure thing in other states with abortion rights ballot measures.

In Kentucky and Montana, for instance, the abortion-rights side ran far ahead of Democrats. GOP Senator Rand Paul won nearly 62 percent of the vote in the Kentucky, while anti-abortion groups were only able to muster 47 percent for their side of the ballot initiative.

But some advocates for the ballot-measure strategy are concerned about a potential conflict if it were used as a partisan tool. One mantra that kept on being repeated by FUF staffers was “You can’t optimize on two variables.” In other words, you can pursue what the best course is for expanding abortion rights or the best course for helping Democrats. You can’t do both.

For Bedard, any down-ballot benefits for Democrats were “a potentially desirable second effect” but it wasn’t the goal. “We got into this not because we’re playing four-dimensional chess but to win back abortion rights for women in places where they can be lost.”

Winter warned those who might be wondering if putting language about abortion on the ballot could help Democrats in the future. “That is wrong. Do not do that,” he said in a tone that sounded more like a parent warning a toddler to stay from a hot stove than a pundit offering analysis. “These campaigns are effective because they work incredibly hard to depolarize abortion and pull it out of the typical Democratic versus Republican frame.”

However, Bedard made clear that they were trying to balance abortion-rights priorities with party priorities. “I do not foresee a situation where we put a question on the ballot where we can win and it hurts Democrats,” she said. “However, what that means is really doing our homework.” Putting the wrong question on the ballot in the wrong state, she continued, could hurt Democrats.

“We're not trying to come into states and advance positions that do not guarantee sort of the most expansive reproductive rights that we can,” she continued. After all, the expansive abortion rights protections that Vermont voters adopted on Tuesday might not succeed in a state like Kansas, where voters simply supported keeping the pre-Dobbs status quo.

From the view of FUF, the debate on what voters actually want is still unsettled, and they are willing to advocate for whatever data science says that American voters want. “I really want to see research before we make that kind of guess about where the American public stands now,” said Bedard.

For 2023 and 2024, the group is looking at where it could put new measures on the ballot. “We know what we win next cycle doesn’t have to be the end,” Bedard said.