MOLLY-MAE Hague has jetted off on a glamorous Dubai babymoon with her beau Tommy Fury ahead of the birth of their first child.

The former Love Island star, who rose to fame in 2019, took to her Instagram to give a behind-the-scenes look at their trip abroad.

Molly-Mae, 23, and Tommy, also 23, last jetted off to the UAE in May when the influencer was just a matter of weeks pregnant.

The Pretty Little Thing creative director revealed they had returned to the same luxury hotel to celebrate her reaching seven months.

Molly-Mae took to her Instagram to show off the break, where she could be seen lounging on the beach in a bikini top.

“Baby-moon,” she told her followers, as she revealed her blossoming bump in zebra-print trousers as she went make-up free. 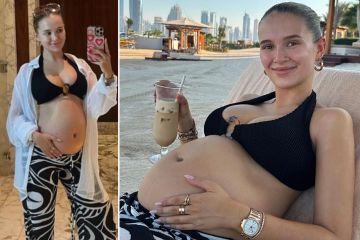 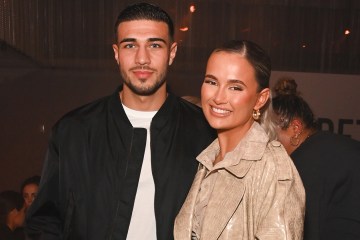 Elsewhere, Molly-Mae posed for a selfie inside the stunning marble-clad bathroom at the luxurious Jumeriah Al Naseem resort.

She smiled for the camera, covering up with a flowing beach shirt, before snapping boxer Tommy by the pool in his swimming shorts.

The TV star went on to snap away at the stunning hotel surroundings, posing with Tommy for a family snap, showing her blossoming baby bump.

The pair then headed out for dinner at swanky restaurant Asia Asia, where they were seen chowing down on noodles and a chicken dish.

When Molly-Mae and Tommy last stayed at the hotel earlier this year, they splashed out on a room that costs a whopping £1,000 a night.

Their expansive suite – dubbed the Ocean Club Superior – included a gigantic bathroom with double sinks and a walk-in shower.

The room has a large chair in the bathroom for relaxing, as well as a freestanding bath and plenty of cupboard space.

Elsewhere in the suite, there is a large double bed with a sofa and gigantic TV, as well as a separate living room space.

The room also includes a French-style balcony with views over the ocean, as well as towards the towering Burj Al Arab.

The £1k-a-night booking also including entry to the Wild Wadi Waterpark next-door as well as breakfast in the room.

Molly-Mae was recently reunited with Tommy in Dubai, who had been in the country ahead of his fight with 5-2 American Paul Bamba.

The couple are expecting a baby girl next year and Molly decided to take the opportunity to fly first class while she still can.

She said: “Upgraded as a treat considering this is the last flight I will take become I become a mum.”

Molly has been candid in documenting her pregnancy journey, previously telling her YouTube followers the only real bump in the road had been a sheer increase in appetite.

Yet on her Instagram Stories today she revealed another aspect of her maternity journey.

The Filter tan brand founder captured an image of her chic bedroom at her multi-million pound Molly Maison mansion, taken at the eye-wateringly early time of 5:55am.

She wrote in the caption: “I really can’t complain about pregnancy but if I were to say the hardest part for me, the 80 toilet trips in the night and the two hours it takes me to get back to sleep after each one.”