GOING into labour is a very daunting thought for many new mums.

For the majority of mums-to-be, their first thought isn’t about how they look.

A young mum has revealed that she wanted to look glam when giving birth, so had her eyelashes done, put her hair in pin curls and did a full face of glam make-up every day in the run up to the big event[/caption] Not everyone agreed with 21-year-old Agnes’ beauty regime, but many revealed that they too did the same thing[/caption]

But for one mum, the first thing she did before going into hospital to give birth was to make sure her hair and make-up looked perfect.

Agnes Zoppa, a 21-year-old from Manchester, was overdue when expecting her first child.

To prepare for the labour, aside from the typical things such as getting a hospital bag packed, Agnes made sure that she looked ready for the special occasion and ensured that her make-up looked flawless and her hair was perfectly curled.

Agnes took to TikTok to share her labour preparation routine and uploaded her clip with the caption ‘Getting ready every day in case my baby makes an appearance’. 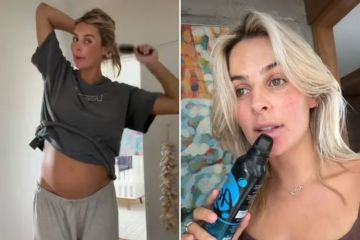 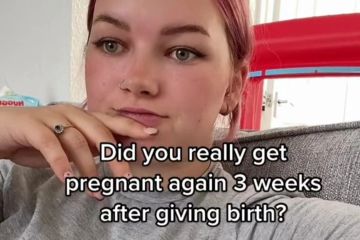 In the video, we initially see Agnes with her hair in pin curls.

She sported a full face of glam make-up, finished with a set of fluttery false eyelashes.

We see the expectant mum mime a remix of the popular Sam Smith song – Unholy.

As her hair is still in pin curls, she mimed: “I hear them whisperin’ ’bout the places that you’ve been and how you don’t know how to keep your business clean”.

Agnes then switched and showed off her hair taken out of the pin curls – which left her with a big, bouncy blow dry look.

She then mimed the remixed lyrics: “Daddy don’t know mumma’s getting hot, got her bills to drop, doing something unholy”.

We think Agnes looked fabulous and many others did too.

Her video has clearly impressed many, as it quickly racked up a whopping 154.6k views.

But the comments on Agnes’ beauty preparation were mixed – while some admitted that they too did the same thing, others thought it was pointless and couldn’t understand why women do this.

One person said: “Look beautiful but trust me babe it will be all off” to which Agnes replied “Thanks babe! and I don’t doubt it, just a little confidence boost”.

Another added: “Something I will never understand”.

Someone else revealed: “I looked a right mess when I went in Labour

I honestly didn’t care though it was hurting to much to care”.

However, one user admitted: “I did this, felt so much better in Labour”.

Meanwhile, a second explained: “Haha this was me!! Every night I would blow dry my hair! Make sure I was tan, nails lashes etc and it did pay off! I had some lovely photos and felt SO much better than with my first where I was a gremlin”.

Whilst another said: “I hope I look as good as this when I go into labour”.

One user questioned Agnes about her make-up routine as she asked: “What products did you use for your base/face and lips?”, to which Agnes revealed the products she used for her birth preparation look.

In a follow-up video, Agnes revealed that she had welcomed her baby into the world – a beautiful girl named Vienna.