PAIGE VANZANT has revealed the worst injury she ever suffered was a horrific broken arm.

PVZ has endured several physical setbacks during her combat sports career, which has recently taken her to the world of bare-knuckle boxing.

But despite taking many a lump inside the BKFC ring, VanZant picked up her worst injury inside the octagon.

The former UFC star shattered her right arm in her flyweight debut against Jessica-Rose Clark in January 2018 when she incorrectly landed a spinning back fist.

VanZant battled through adversity and made it to the final horn, although she ended up dropping a unanimous decision defeat to ‘Jessy Jess.’

She recalled the injured during an impromptu Instagram Q&A, saying: “My worst injury is I shattered my forearm in the middle of a fight and then kept fighting. 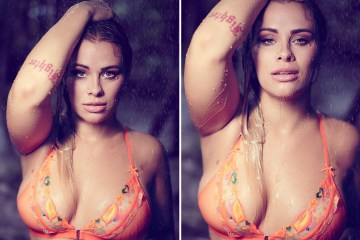 “And I won the third round, with a broken arm.

“But after I broke it, I had a metal plate put in my arm and then broke it through my plate twice.

“All from a stupid spinning back fist.”

VanZant then shared a series of snaps of her broken arm – including the gruesome scar she was left with after surgery.

The American Top Team standout was due to be back in action at BKFC’s debut show in London in August but her clash with Charisa Sigala ended up being axed.

A furious VanZant wrote on social media: “I did not pull [out] from my fight!!!! I was pulled!

“I am pissed off and heartbroken.

“I worked my f***ing ass off to be pulled a week before I am supposed to compete.”