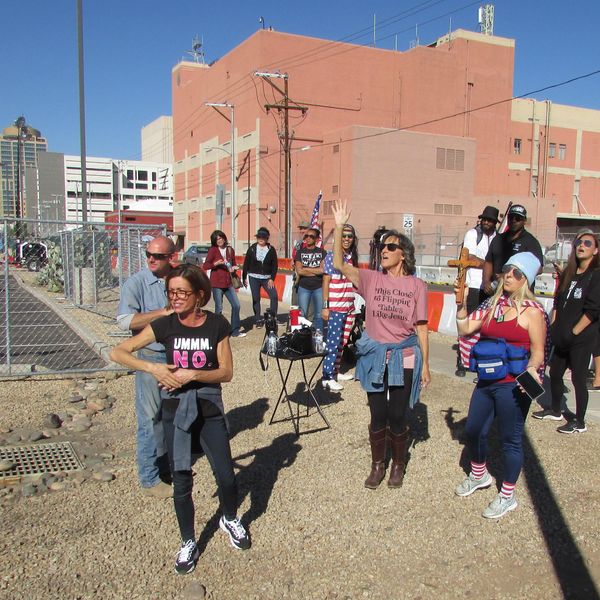 PHOENIX — The small crowd assembled outside the Maricopa County election center — a remnant of the louder and more numerous legions that sprung up in defiance of COVID restrictions and the presidential election outcome two years ago — kept vigil as election workers continued to count ballots on Monday afternoon, and as their candidate Kari Lake’s hope for becoming the next governor of Arizona gradually slipped away.

They blew shofars outside the Maricopa County Tabulation & Election Center, commonly known as MCTEC, which was surrounded by security fencing, with sheriff’s deputies patrolling the parking lot and others scanning the crowd from the rooftop of the facility.

Through a bullhorn adorned with Three Percenter and pro-Second Amendment stickers, the protesters harangued two counter-protesters. Although the race would not be called by major news organizations for another five hours, one of the protesters commandeered the bullhorn to announce plans to gather at the Arizona state capitol at 4 p.m. in anticipation that Democrat Katie Hobbs would be declared the winner.

“There’s a war going on,” said a Marine Corps veteran who identified himself only as Larry G. “It’s going on across the whole world. Right now, the world’s eyes are on Phoenix. This is Ground Zero. Today, the whole world is watching.”

Election deniers have primed the MAGA base of the Republican Party for weeks with messaging claiming that the only way pro-Trump candidates like Lake could lose would be as a result of fraud. In recent days, prominent figures from retired Lt. General Michael Flynn and Amy Kremer of Women for America First to Trump himself have urged Lake to not concede her race. Yet no infrastructure has emerged that appears capable of sustaining prolonged protests with any credible expectation of overturning the result.

The exception was a protest on Nov. 12 outside MCTEC that was publicized by Ben Bergquam, a contributor to “War Room with Steve Bannon.” State Sen. Wendy Rogers initially promoted the rally with a tweet calling on “patriots” to “rise up” and “pray for the Light to shine the darkness and for His truth to be revealed,” but then, on the day of the rally, she reconsidered with a tweet advising that “it’s better for folks to say away from Maricopa County offices so they can finish their job of counting votes.” Conservative influencers Charlie Kirk and Jack Posobiec also urged Lake’s supporters to stay away from MCTEC.

Absent unifying calls from prominent MAGA figures, the locals who showed up outside MCTEC on Monday offered a mixture of responses to the prospect of their candidate going down in defeat.

Larry G said he believed that Democrats had conspired to steal the election from Lake, but expressed faith that somehow a higher power would intercede.

“I think some behind-the-scenes things are going to happen to prevent it,” he said. “The black hats and white hats are both keeping us in the dark…. We’re left guessing.”

He mentioned that Donald Trump is expected to “come out with a special announcement,” widely believed to be his intention to run for president again. Larry G suggested a different interpretation, making an outlandish claim that Trump had invoked the Insurrection Act.

“We’ve been under military law since he did that,” he said. “Fortunately, it’s been a nice, gentle, martial law. He said, ‘I shall remain president indefinitely until our enemies are removed.’”

Calvin Lee, who voted for Lake and joined the protest, said that although he had misgivings about Hobbs’ possible conflict of interest overseeing her own election as secretary of state, he had not seen any evidence of fraud.

“We need to take the temperature down,” he said. “Until I see something alarming, I’m not going to scream ‘rigged election.’”

Lee predicted that many of Lake’s supporters “will accept the result,” but “a minority will say the election is rigged.”

The paltry turnout and uneven resolve of the protest was underscored by a woman who joined Larry G in blowing shofars at passing traffic outside MCTEC. She recalled protesting outside MCTEC for about two weeks in 2020. The numbers at those earlier protests had been significantly higher.

“Hundreds of thousands of people should be here,” said the woman, who declined to give her name. “This is our country. We’re in trouble.

“They’re bringing down our nation to establish the New World Order,” she added.

One woman wearing a Lake for Governor hat carried a pistol on her hip. At times, arguments between Lake supporters and three counter-protesters grew heated.

Another counter-protester challenged the Lake supporters to explain what their objections were to the vote count taking place inside the facility.

Troy Jenkins, a Lake supporter, picked up the bullhorn and responded with rant against abortion, apparently prompted by Hobbs’ pledge to protect reproductive freedom.

“They put Planned Parenthood in neighborhoods of people who are less fortunate because they don’t want those people to reproduce,” Jenkins argued.

As the two men continued to argue, Jenkins veered into anti-trans comments, denying transwomen their humanity by misgendering them as “men claiming to be women,” and arguing they have an unfair advantage in sports and that there is something improper about transgender people using the bathroom that accords with their gender identity.

“Are you guys afraid of what’s going on in this building?” the counter-protester asked.

Some of the protesters claimed that they have been harassed for their beliefs, including both COVID denialism and the belief that elections are routinely stolen through fraud.

The woman who had been blowing the shofar earlier with Larry G nodded in agreement.

“The helicopters harass me,” she said. “They buzz me. They fly really close to the ground near my condo.”

Jenkins mentioned that an acquaintance had gotten a “food illness.” He added, “A couple days later, my wife got the same thing.”

But among the group, there was a consensus that Jenkins had experienced the most severe harassment. Last December, Jenkins was forcibly arrested at his home in the city of Maricopa, and involuntarily committed to a mental health facility. Jenkins had organized “maskless marches” at stores like Walmart, and he said after at least one of the marches, he was tailed by suspicious vehicles. Discussing his travails, he mentioned that he also had planned to travel with Jacob Chansley, the so-called QAnon Shaman, to Washington, DC on Jan. 6, 2021, but was unable to get time off from work. Still, he thought his association with Chansley had brought negative repercussions.

Recounting his arrest, Jenkins said he encountered a man in his neighborhood brandishing a rifle. In response, he said, “I started to read the Bible loudly. The police came to arrest me.”

Local news reports on the incident cite a Maricopa police report that indicated that when police put Jenkins under arrest, he tensed up and pulled away. Jenkins told Raw Story that the police took away a firearm from him. The news accounts indicate he had 50 rounds of ammunition and an AR-15 magazine, and was wearing a plate carrier.

According to the police report, when the police removed the firearm from him, he took a karate fighting stance and said, “I do not need a pistol to kill.” Jenkins did not mention the alleged fighting stance or alleged threat in his comments about the incident to Raw Story.

In Jenkins’ telling, the incident was a demonstration of almost supernatural powers accessed through religious faith.

“They tell me to put my Bible down,” Jenkins said. “They put my Bible on the ground. They tased me. They bring the dog out. I’m praying. The Bible flips to my hand, and I start to read it. They grabbed the Bible away from me again, and the officer put it under his knee like it was a weapon.”

Jenkins said his wife recorded a video of the Bible supposedly moving across the ground into his grasp. He offered to show the video, but had trouble finding it on his phone and eventually gave up.

While Lake’s advisors have been reportedly advising her to take a measured approach in response to her defeat, she struck a defiant tone on Monday night, tweeting, “Arizonans know BS when they see it.”

Several prominent Trump allies involved in the effort to overturn the 2020 election are repeating history by loudly proclaiming that Hobbs’ election lacks legitimacy.

Before the election was called, Steve Bannon, the former White House strategist said on his show “War Room” on Monday: “Yes, we have to stop the certification. No doubt.”

Seth Keshel, a former Army captain who worked with Flynn on the effort to overturn the 2020 election, wrote on Telegram: “Katie Hobbs is not legitimately elected.”

While a protest has been called for 4 p.m. today at the Arizona state Capitol, it is unclear which, if any, MAGA influencers will summon their supporters, or who will step into the leadership vacuum.

Ali Alexander, who organized the 2020 “Stop the Steal” movement, has been hinting at his desire to organize protests on his social media accounts on and off all weekend. He stopped short of issuing a call on Monday, complaining that he had been sidelined.

“Do you know how helpless and embarrassing it is to have gotten calls, texts, messages from Arizonans asking where the backup was?” Alexander wrote on TruthSocial. “People have literally cried on the phone to me. And me having to explain, I don’t have the platform to help and TPUSA and War Room and RNC ordered everyone to stand down and let Maricopa humiliate the Constitution.”

ALSO IN THE NEWS: Liz Cheney leads the way in 'congratulating' Kari Lake on her Arizona loss