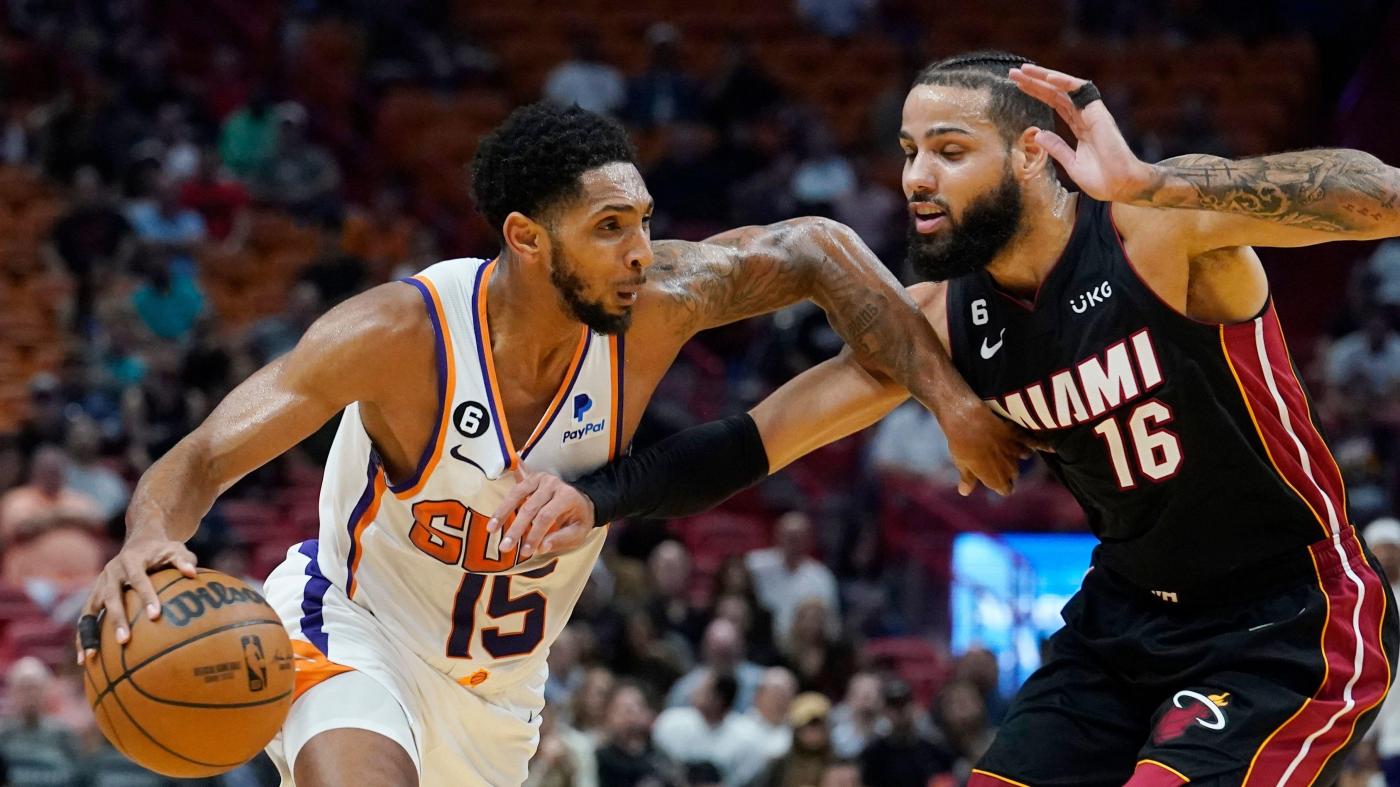 Observations and other notes of interest from Monday night’s 113-112 victory over the Phoenix Suns:

– Yes, the Suns were without Chris Paul. But this still was a quality opponent.

– And, in the end, the rare quality win for the Heat.

– Because in crafting this 7-7 record, there haven’t exactly been many.

– The victory in Portland? Sure.

– Beat the Warriors at home? Golden State hasn’t won a road game yet.

– The win over the visiting Raptors? Merely part of a split of consecutive home games.

– Beating the Kings at home? Uh, that was the one the NBA said Tyler Herro traveled on his winning 3-pointer at the buzzer.

– And the two wins over Charlotte? Merely bottom-feeding.

– Which is why this meant plenty.

– With .500 arguably never quite feeling as good.

– With the appearance, Adebayo tied Kevin Edwards for 15th on the team’s all-time appearance list.

– This time Gabe Vincent and Duncan Robinson entered together as the Heat’s first two substitutes, but not with Dewayne Dedmon, as had been the case in recent games.

– Robinson’s sixth point moved him past Michael Beasley for 22nd on the Heat’s all-time scoring list.

– Lowry’s first 3-pointer was his 2,000th, making him one of 12 players to reach that regular-season total.

– With his first steal, Strus reached 50 for his career.

– Butler’s fifth basket moved him past Michael Beasley for 19th on the Heat all-time list.

– Herro missed his fourth consecutive game with an ankle sprain.

– “You just never know with ankle sprains,” coach Erik Spoelstra said. “They’re never on necessarily your timeline. So he just doesn’t have the mobility yet. But he is getting better, making progress.”

– Dedmon, who again had been listed as questionable with plantar fasciitis, again was able to push through.

– “He’s been able to manage everything, shootarounds, practices, games,” Spoelstra said. “This is just the world of over-communication, of where everybody’s injury statuses are. I get it from a league standpoint, but he’s ready to go.”

– With Dedmon available, Orlando Robinson, who was added on a two-way contract for depth at center, was inactive.

– That preserves the maximum of 43 games that Robinson can be on the active roster as part of his prorated two-way contract.

– Forward Jamal Cain, who has a full allotment of 50 two-way roster appearances, was active.

– Suns coach Monty Williams spoke pregame of his respect for the Heat’s program, and of how appreciates what Heat president Pat Riley has accomplished in Miami, having played for Riley with the Knicks.

– “I was talking about this program and Utah when coach [Jerry] Sloan was there,” Williams said pregame. “They just did their thing, didn’t really care what anybody else did. And I have a lot of respect for that.”

– He then spoke of how Riley has established unwavering guidelines.

– As for the Heat, Williams said, “A program like this, they’ve won at the highest level multiple times, and I just respect the stamina that they’ve had here and it’s something that our guys respect and we try to add some of that to our program.”

– Wayne Gretzky and Odell Beckham Jr. were among those in the crowd.