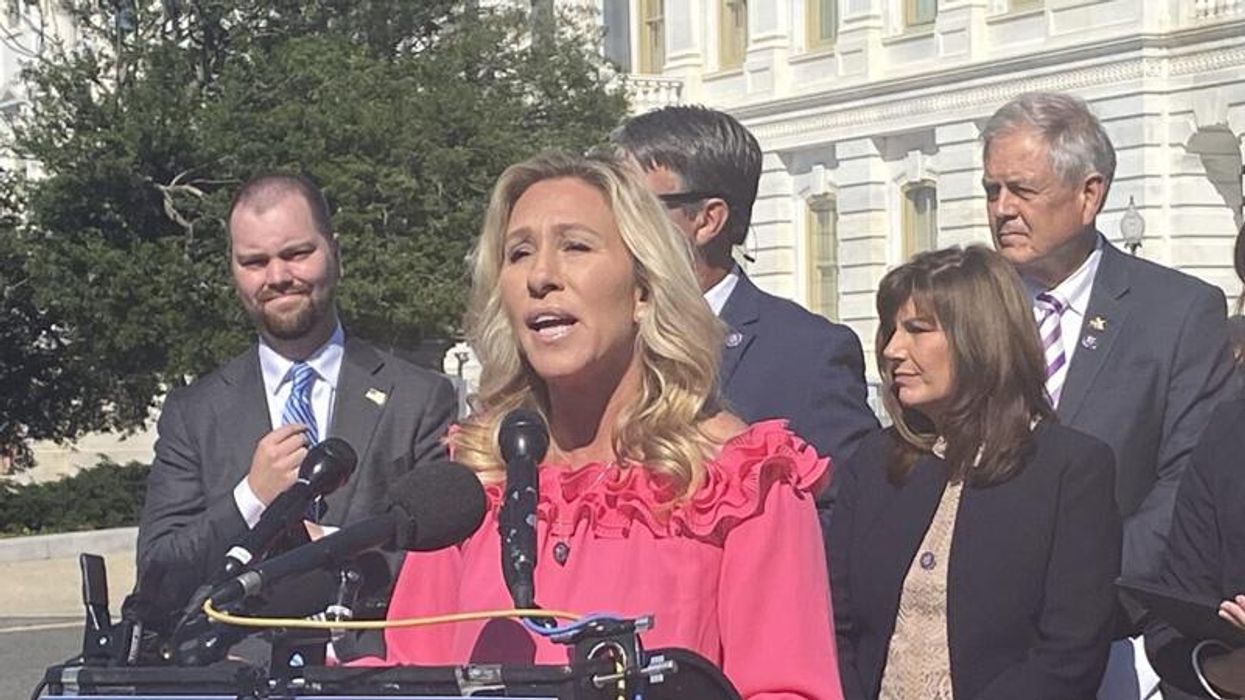 WASHINGTON — Conservative Republicans gathered outside the U.S. Capitol on Tuesday to commit to bringing legislation to the floor that would make it a felony to perform gender-affirming care on transgender youth, should the GOP take control of the U.S. House following the November midterm elections.


“How on earth can this be happening in America? It’s hard to even understand,” said Georgia Republican Rep. Marjorie Taylor Greene, the main sponsor of the bill, referring to gender-affirming medical treatments sometimes used by transgender and nonbinary people, including minors.

The group touted the bill’s 37 GOP co-sponsors in the House, though that number is less than 10% of the chamber’s members, far short of the backing it would need to move on to the U.S. Senate even if Republicans take control of the House.

Conservative Republicans across the country have been seizing on the issue of gender-affirming care for transgender youth and attempting to limit it. According to the Kaiser Family Foundation, “numerous states have implemented or considered actions aimed at limiting LGBTQ+ youth access to gender-affirming health care,” and some have enacted restrictions. The foundation says that 15 states in 2022 are considering 25 similar bills.

Lee Savio Beers, American Academy of Pediatrics president in 2021, said in a statement this year that it’s “critically important for every child to have access to quality, comprehensive and evidence-based care — transgender and gender-diverse youth are no exception.”

“As pediatricians, we will continue to speak up and advocate for our patients. We also want transgender and gender-diverse youth to know that not only do we care for them, we care about them, we value them and we will do all we can to ensure they have access to the care they need and deserve,” Beers added.

The legislation proposed in the U.S. House would make it a felony to perform more than a dozen gender-affirming medical procedures on someone under the age of 18 and would allow people who had that care as minors to file a civil lawsuit against each person who provided that care.

The legislation would also prevent federal dollars from going to gender-affirming care and would bar any federal employee from performing such a procedure, or procedures.

Higher education institutions would be prevented from offering instruction in gender-affirming care.

Anyone experiencing a disease, disorder, infection, or injury related to a previous gender-affirming procedure would be allowed to get care under the bill’s provisions.

There’s also an exception for anyone with a physical disorder, physical injury, or physical illness who would experience “imminent danger of death or impairment of a major bodily function” without one of the procedures or treatments.

The bill is unlikely to get past the U.S. Senate’s 60-vote legislative filibuster even if Republicans take back that chamber following November’s midterm elections and the bill is able to pass the U.S. House. And the legislation would be certain to face a veto from President Joe Biden, who in June signed an executive order that seeks to safeguard LGBTQ+ health care.

The House GOP measure includes the phrase “gender-affirming” nearly 50 times throughout the bill text and Greene used the phrase on Tuesday before arguing that type of care doesn’t truly exist.

Rep. Bob Good, a Virginia Republican and a co-sponsor, questioned why more members of Congress weren’t at the press conference to support the legislation.

“Why wouldn’t every member of Congress be here?” Good asked.

What’s on in Malta and Gozo – October 3