A PAIR of jaguars have proved they are the masters of hide-and-seek in this forest scene.

An image appears to show a single jaguar peering from the long grass – but can you spot the second one?

Can you spot the second jaguar in this picture?[/caption]

One image shows a beautiful green landscape in the heart of South America.

The picture was captured by a British photographer Martin Carpenter while he was travelling in the Pantanal, Brazil.

In one snap, one of the felines blends seamlessly in the bush while the other bursts from the grass – prowling its territory.

And if you haven’t managed to see the hidden jaguar, focus on the right side of the picture. 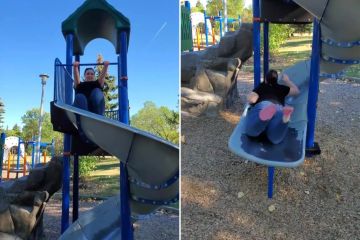 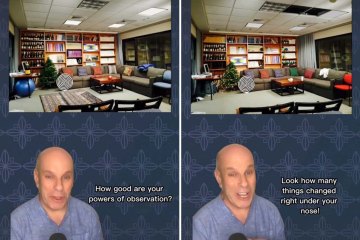 Can you spot all 20 changes in this mind-blowing optical illusion video?

The jaguar can be seen peering through the greenery.

For those still struggling, you can scroll down to the bottom for the answers.

You can also test your eyesight if you can see the sneaky lion that has been hiding in the African Serengeti.

Mr Drysdale from Johannesburg, South Africa, who took the snap, said: “Because the area is relatively flat, most lion prides will choose a rocky outcrop to have a lookout for the passing herds of Wildebeest and Zebra.

“The lion pride is spread out over the rock, sleeping in the shade to shield themselves from the heat of the day.

“It’s good to find the predators in the vast Plains.”

And if you found the mammal in this picture too easily, why not try finding a smaller feline hiding in this kitchen.

Sharp-eyed viewers who managed to spot the cat in under 60 seconds should certainly be impressed with themselves.

And for readers who still haven’t found the hidden feline, try looking on top of the rustic kitchen cabinet.

Cat lovers may also want to find another cheeky feline that has decided to hide between bottles of vitamins, creams and babies’ nappies in a pharmacy.

Felines also famously love hiding and fitting into tight spaces – can you spot the cat in this picture of a very cluttered house?

The second jaguar is circled in red[/caption]