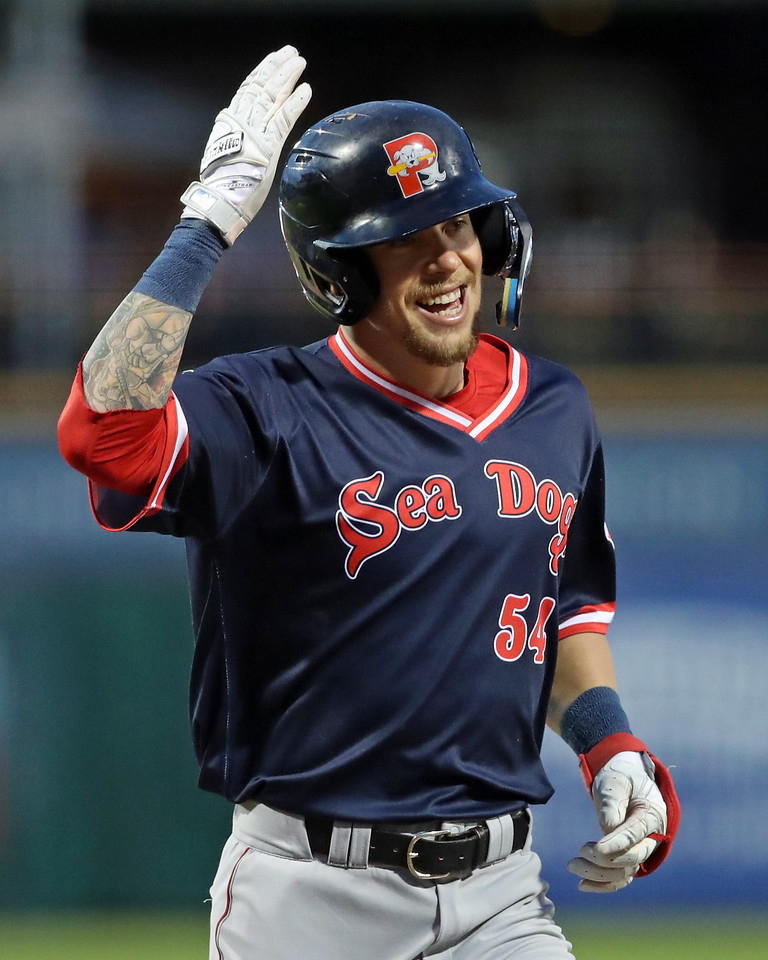 9/21 Cup of Coffee: Portland rolled into the Eastern League playoffs having won 17 of its final 20 games, but dropped its series opener in the best-of-five set despite a three-hit night from Christian Koss (pictured) and home runs from Niko Kavadas and Hudson Potts. Worcester beat both Syracuse and the rain, as Kyle Hart completed a six-inning victory at Polar Park.
-----
Worcester Red Sox 3, Syracuse Mets (NYM) 2 (6 innings)
The WooSox kicked off their series with a victory in a rain-shortened affair. Kyle Hart returned to Triple-A with a complete game victory. In his first Worcester appearances since May 7, the left-hander allowed two runs on eight hits in six innings, striking out and walking two apiece. The key hit was a two-run double in the fourth inning by Jaylin Davis that broke a scoreless tie. Johan Mieses and Ryan Fitzgerald had two hits apiece, with both coming on to score on the Davis double.
Worcester has been all but officially eliminated from playoff contention, sitting 7 1/2 games behind first-place Durham with eight contests remaining.
-----
Somerset Patriots (NYY) 9, Portland Sea Dogs 4
Game 1, Eastern League Semifinals
Portland, the second-half Northeast Division champions, kicked off a best-of-five series with Somerset after just finishing a six-game set with the Patriots on Sunday. Things got off to an auspicious start as Niko Kavadas and Hudson Potts hit back-to-back homers in the second inning. Kavadas's blast came with Christian Koss on base, and the Potts round-tripper opened up a 3-0 lead.
Shane Drohan cruised for three scoreless innings and retired the leadoff man in the fourth, but his own throwing error allowed the second batter of that inning to reach, opening the floodgates. Somerset exploded for eight runs in the inning, all coming with two outs. The first five scores were charged (all as unearned) to Drohan, and the following three to Ryan Zeferjahn. The Sea Dogs bullpen allowed a single run in the fifth and shut Somerset down the rest of the way, but Portland could not mount a comeback and dropped the series opener.
Koss led the way on offense, going 3 for 4 with a run scored and an RBI. Wilyer Abreu doubled and scored a run as part of a 2-for-4 evening. The second game of the series will take place at Hadlock before moving south for game three and beyond, if necessary.
-----
Player of the Day: In a season in which he led the Sea Dogs with 127 hits, it is appropriate that Christian Koss ripped three to kick off playoff action. Koss, acquired in 2020 for left-handed reliever Yoan Aybar, also led the team in doubles (22), home runs (17), RBI (84), and games played (125). The 84 RBI were the most by a Portland player since Luis Exposito drove in 94 back in 2010.
Photo Credit: Chirstian Koss by Kelly O'Connor

Tragic: Nobody Can Find Mario’s Arse In Our First Look At The Nintendo Movie