GINO D’Acampo looked furious at the end of today’s Loose Women as he was stopped from making an announcement.

The This Morning chef – who has a habit of wreaking havoc on any live TV show he is booked for – appeared today.

Linda Robson, 64, even tried to cover his mouth as he spoke over the final part of Loose Women.

Gino, 46, said in the episode’s dying moments: “One second – I’ve just got an announcement.”

However, the show, led by the unflappable Jane Moore, made it clear it wasn’t going to stop for him.

Jane earlier warned him they were running out of time, saying: “You work in television so you know the importance of timing.” 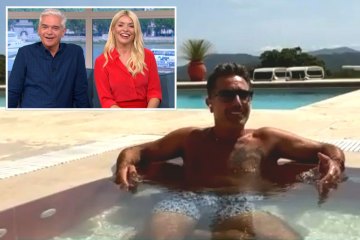 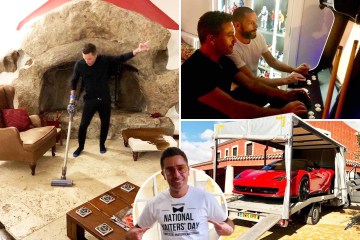 Gino protested as he was silenced: “But I’m in the middle of the announcement.”

However, the highlights of tomorrow’s show were read out, including an interview with Nadiya Hussain.

The chef said: “So I’m here and you’re plugging someone else’s book?”

He was then seen complaining with his hand outstretched as the show ended and the music played.

Linda was shown leaning over and putting an arm around him before the credits appeared while he continued remonstrating.

One viewer wrote: “Why bring Gino out and speak over him… that’s not good.”

Another disagreed, posting: “Oh I’m glad someone shut him up!!!”

Gino has just returned to the UK from Italy, where he has been since March.

He appeared two days after jetting back from Sardinia to promote his book, Gino’s Italy: Like Mamma Used To Make and his show Gino’s Italy.

The star has already returned to This Morning, appearing via video link from his luxury hot tub.

He sparked uproar on that show too when he spoke about the moment he fulfilled his promise of getting naked if the show won an NTA.

He said to Holly Willoughby: “I wanted to ask you something about the NTAs, tell me the truth though.

“Did you ever put your eyes down and look at my willy? Tell me the truth.”

A horrified Holly gasped: “No, I definitely did not.”