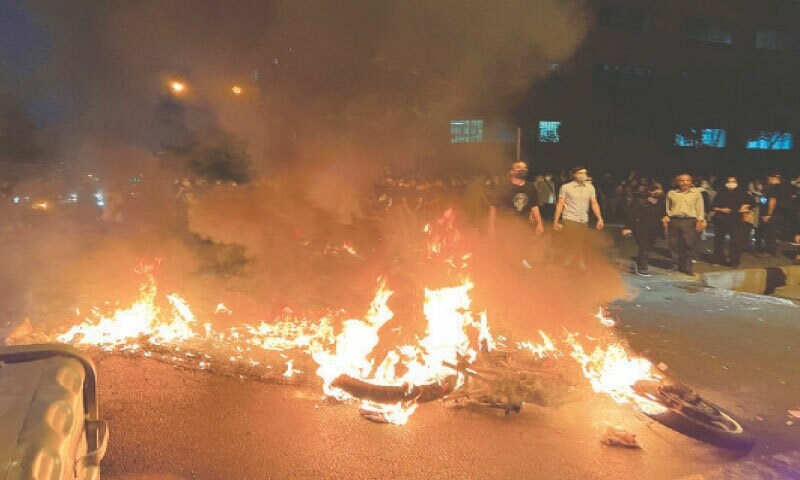 TEHRAN: Three people have been killed during protests in Iran’s Kurdistan province over the death of a young woman after she was arrested by “morality police”, the region’s governor said on Tuesday.

Public anger has grown in Iran since authorities on Friday announced the death of 22-year-old Mahsa Amini, after her arrest by the police unit responsible for enforcing a strict dress code for women.

The death of Amini, who had fallen into a coma after being detained for wearing “improper” hijab, has triggered violent protests as well as rare outspoken criticism from senior officials in the Islamic republic.

On Sunday, police made arrests and fired tear gas in Amini’s home province of Kurdistan, where some 500 people had protested, some smashing car windows and torching rubbish bins, reports said.

On Monday, several hundred protesters in Tehran, including some women who took off their headscarves, were dispersed by “police using batons and tear gas”, according to Fars news agency.

Kurdistan governor Ismail Zarei Koosha said on Tuesday that three people had been killed during the protests in the province, blaming the deaths on “a plot by the enemy”.

“One of the citizens of the city of Divandarreh was killed with a type of military weapon that none of the ranks of the armed forces use,” he was quoted as saying by Fars, adding another person was killed in the city of Saghez and “left near a hospital in a car”. He did not give any details about the third death or say when the killings occurred.

“I assured the family... that all institutions will take action to defend the violated rights of Miss Amini and none of their rights will be ignored,” the representative, Abdolreza Pourzahbi, was quoted as saying.

Amid growing controversy over the conduct of the morality police, known formally as the Gasht-e Ershad or “Guidance Patrol”, parliament speaker Mohammad Bagher Ghalibaf said Tuesday that the police unit’s conduct should be investigated.

“In order to prevent repetition of such cases, the processes and the method of implementation in guidance patrols... should be investigated,” he said, quoted by state news agency IRNA.

The state-affiliated Organ­isation for the Promotion of Virtue and the Prevention of Vice, set up to encourage good behaviour and prohibit immoral activities, said the police unit should not arrest people for breaking dress regulations.

“The view of this issue should be changed,” the influential organisation said in a statement, stressing that it opposed “the arrest and trial of ordinary people” for clothing infringements.

“The criminalisation of those not wearing a headscarf and the arrest, filing of cases and the prosecution of people which will only cause social tensions... should be amended in law,” it added. The death of Amini has caused international consternation, including from the United Nations.

The United States criticised her death and the way it said security forces handled the ensuing protests.

Iran’s Foreign Minister Hossein Amir-Abdollahian on Tuesday rejected the criticism and said a probe had been ordered into the “tragic death” of Amini, who he said, quoting President Ebrahim Raisi, “was just like our own daughters”.

Inside Iran, and following protests in Tehran and a number of other provinces, lawmakers have also raised their voices.

Jalal Rashidi Koochi, a member of parliament, told the ISNA news agency the police unit was a “mistake” as it only resulted in “loss and damage” for Iran. Another lawmaker, Moeen­oddin Saeedi, said the unit “should be removed” and shut, ILNA news agency reported. Clerics have also spoken out.