BBC Breakfast’s Sally Nugent broke her silence on her absence from the show after a ‘very interesting day’.

However, she was replaced by Nina Warhurst on Tuesdays show before returning to the BBC Breakfast sofa today.

She explained to Jon and viewers that she had been given the chance to speak with tennis legend Roger Federer after he announced he would be retiring from the sport.

She said: “Very lucky. You would argue that definitely one of, but arguably the greatest male tennis player of all time, Roger Federer decided he wanted to have a chat with BBC Breakfast.

“We know he was retiring, he’d announced that hadn’t he a little while ago but hadn’t done any big interviews. So we were invited along to go and have a talk to him.” 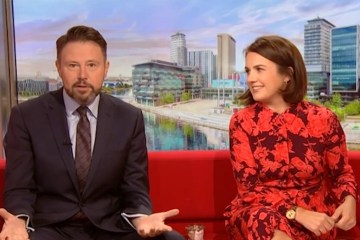 Roger, 41, announced the sad news he was retiring from the sport earlier this month after a glittering career on the courts.

The Swiss told Sally about his reasons for retiring now, his final match and what his plans are once he hangs up his tennis racket.

Speaking about the eight-times Wimbledon champ, Sally added: “The way he plays tennis is the way he chats. Calm. Controlled. Knows what he wants to say.”

Jon joked: “The very opposite of sitting next to me everyday.”

The pre-recorded interview then played and afterwards Sally said: “Interesting eh? Not finished with tennis, won’t disappear, he wants to find the next Swiss tennis champion…”

Her co-host cheekily said: “And you only asked two good questions.”

With a giggle, Sally replied: “He must love me clearly.”

BBC Breakfast airs daily from 6am on BBC One.