THERE is a chemical in parmesan cheese that makes it smell like vomit and it has also been found in dead bodies.

Kassandra who goes by @k4554ndr4 on TikTok shared this disturbing fact in a video full of weird things you probably didn’t know about.

“And it’s also found in barf,” she said.

Some commenters had suspicions of the stinky cheese, but may have not realized where the smell came from until now.

One commenter said: “As a nurse I stopped eatting parm years ago becuase I thought it smelled like dead bodies !!” 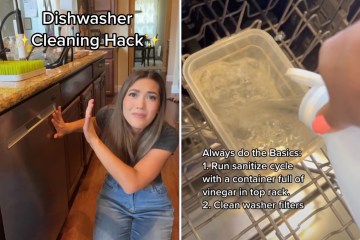 “I’ve been telling people for year’s that parmesan cheese tastes like sick but they never agreed. I have proof now,” someone else said.

Another user added to the fact. They said “butyric acid is also found I American chocolates but not in European.”

Someone else also mentioned that the chemical is in American chocolate saying “that’s why their chocolate tastes rank (esp Hershey).”

The longer the parmesan ages the more butyric acid it will contain, according to the outlet, Dark Cheese.

Free fatty acids are also found in parmesan cheese due to the complexity of the bacteria population that grow inside it.

These chemicals such as Butanoic, hexanoic, and octanoic acids can contribute to the smell of parmesan cheese as well, the outlet reported.

People describe these chemicals as rancid, body sweat, or cheesy smell, according to Dark Cheese.

Another reason that parmesan cheese may smell like vomit is because it contains ammonia, which has a pungent smell that people associate with urine or vomit, the outlet said.

Your condiments aren’t the only thing that can smell at the dinner table.

The U.S. Sun has shared seven foods that are most likely to leave you with bad breath, according to a dentist.

Dolphins QB Tua Tagovailoa Ruled OUT for Sunday vs. Jets

2023 Best Picture Oscar contenders release dates: When can YOU see them?