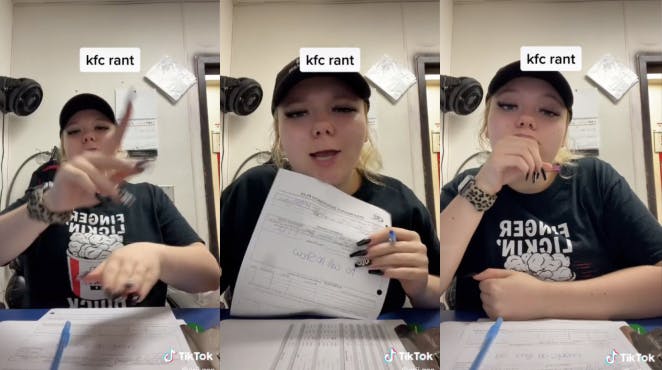 A TikToker filmed herself writing up and criticizing co-workers for not showing up to work, sparking debate.

In the video, she rants about her co-workers as she’s filling out paperwork. “Why can’t people just show up for a shift? If you don’t want to work, I understand, don’t come to work, but at least say you’re not coming to work,” she says.

While slamming the table, she says It’s been 45 minutes since the start of her shift and that she still can’t open the restaurant because there aren’t enough employees present.

“I was here at 9am. Why can’t you all just show up for your f*cking shift? At least just call and be like, ‘I’m not coming’. And then you try to call people in, and no one wants to answer the phone. At least just tell me no.”

The video started a discussion in the comments. One commenter criticized the TikToker for publicly ranting about her co-workers. “I’m sure ur the reason they don’t wanna come in because bosses bash people,” they speculated, to which the TikToker replied by clarifying she is their co-worker, not their boss.

Another commenter who claimed to be a KFC employee shared a similar experience. “Assistant gm at kfc and deadass ran window and line by myself yesterday cuz 4 people called out,” they said.

“Meanwhile you’re sitting in the back and not doing anything in the front to better help the process, write up can wait till you leave,” a third said.

“They don't pay enough I worked it for 3 days no way I can't blame them give people incentive to come to work more, pay bonuses,” one user said.

It's unclear why the workers didn't show up. However, many workers are no longer willing to put up with low pay and inadequate working conditions, in part, leading to “The Great Resignation.” The workers aren’t afraid to walk away if they feel like their employers aren’t valuing their labor properly.

The TikToker posted another video on Tuesday claiming she ended up getting fired from her job.

In the video, she says she was fired over her TikTok posts about the restaurant chain. According to her, management told her that she previously signed an agreement not to post anything about KFC, in a KFC uniform, or inside of a KFC restaurant. She also states she doesn't remember signing such an agreement, but that she "probably did."

The DailyDot has reached out to @arii.gen via TikTok comment.

The post ‘I was here at 9am. Why can’t you all just show up for your f*cking shift?’: KFC worker blasts co-workers for not showing up, sparking debate appeared first on The Daily Dot.

Radio host Frank Zammit on mental health: 'It is OK not to be OK'