Takeshi Kimura and Kei Cozzolino came home comfortable winners in the first of this weekend’s two Fanatec GT World Challenge Asia Powered by AWS races at Fuji after CarGuy Racing’s Ferrari started on pole, slipped to fourth and worked its way back into contention post pitstops.

Cozzolino took the chequered flag 13.5 seconds clear of Yogibo Racing’s Kiyoto Fujinami and Naoki Yokomizo who had earlier passed Kimura for the lead, while Tanart Sathienthirakul held off a charging Nick Foster to complete the podium with AAS Motorsport co-driver Kantadhee Kusiri.

Further back, Team Scala were on course for a crushing GT4 victory until a one-second stop-go penalty allowed Koshido Racing’s Motoharu Sato and Katsuyuki Hiranaka to score an unlikely win. 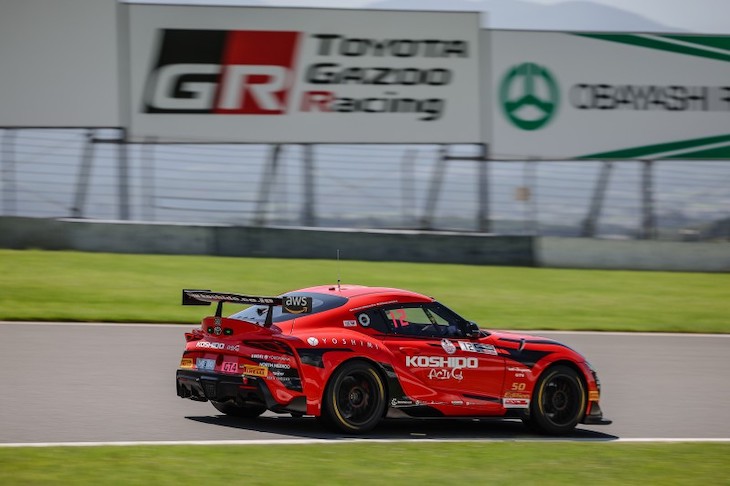 Kimura’s shock pole position against Yokomizo and Kusiri meant the Am driver would have two theoretically faster Silver-graded drivers to contend with at the start of Saturday afternoon’s 60-minute race. 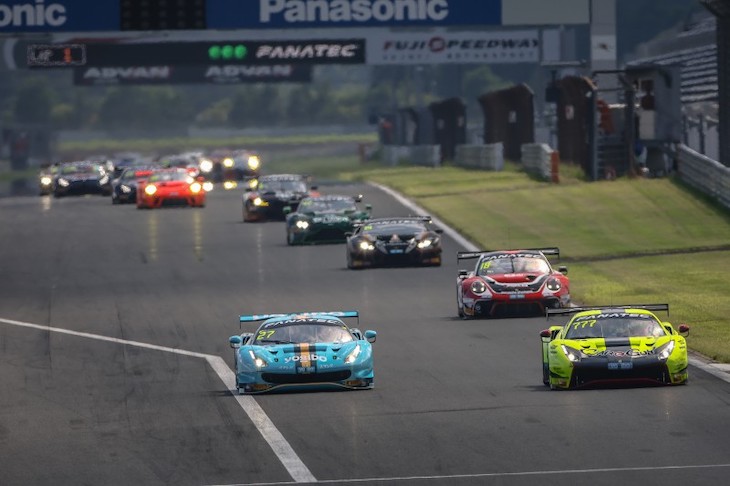 Sure enough, Yogibo’s Ferrari slipstreamed its way past into Turn 1 at the beginning of lap two before AAS’s Porsche completed the same move soon after. However, CarGuy perhaps hadn’t reckoned on Hiroshi Hamaguchi, who’d qualified fifth in Reap Fueling Ambitions’ Lamborghini, also getting past before the end of lap four.

The top-two initially pulled clear before their scrapping allowed the Huracan to make it a three-way lead battle before the pit window opened on 25 minutes.

But while Yogibo pitted Yokomizo at the first opportunity, Kusiri and Hamaguchi went deeper into the 10-minute window. And that resulted in Fujinami extending his lead over both cars once the stops were completed.

Kimura, meanwhile, was six seconds behind the race leader when he handed over to Cozzolino early in the window. And, just as it did for Yogibo, this proved to be the faster strategy. Indeed, #777 split the Porsche and Lamborghini as they exited the pits together and then easily passed Sathienthirakul thanks to its superior tyre temperature.

Fujinami led by almost three seconds at that point but he was caught and passed within two laps by the relentless Cozzolino who, as at Suzuka, had pace to burn.

Sathienthirakul appeared safe in third, and especially so when Hamaguchi’s co-driver Mineki Okura was forced to retire soon after making his pitstop. However, championship leader Nick Foster was on a charge after a 10-second Success Penalty cost the Triple Eight JMR Mercedes-AMG he shares with Prince Jefri Ibrahim time. He had soon relieved D’station’s Tomonobu Fujii of fourth but ran out of laps to catch the Porsche, which took the chequered flag 1.2s ahead. 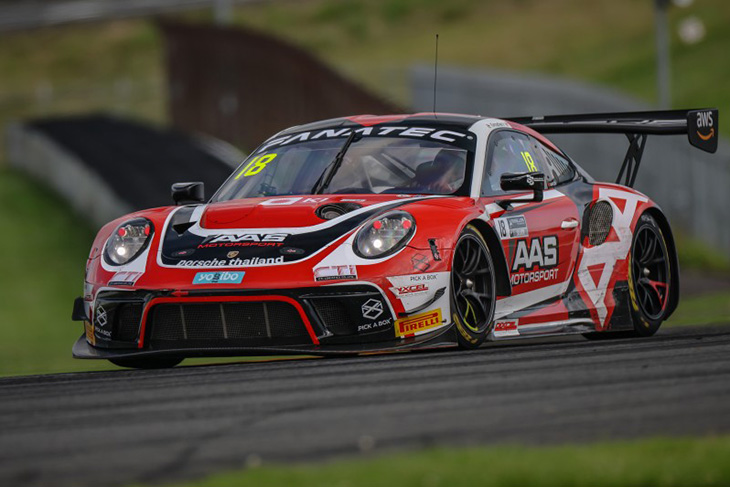 Fuji’s opening race will be one that Team Scala really should have won, such was their dominance before the pitstops.

Tashiro led away from pole and immediately pulled clear of Lee, who passed front row starter Masayoshi Oyama early on. Akiland’s Toyota was back ahead of GTO’s Mercedes-AMG before the pitstops, by which time the result should have been a foregone conclusion given Team Scala’s advantage. 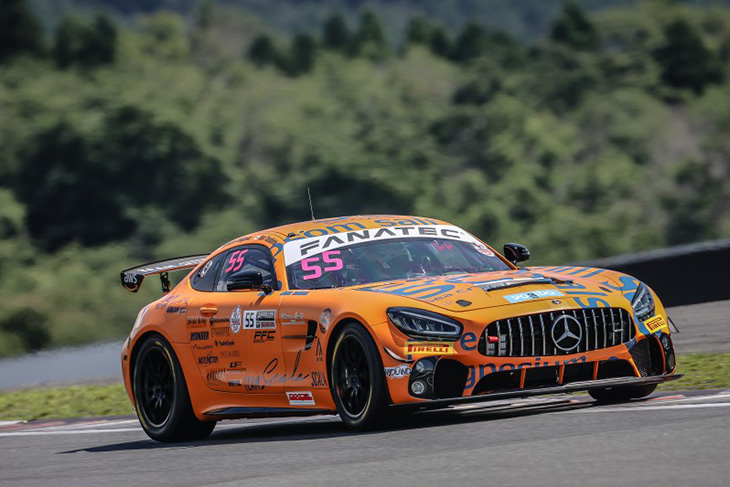 Indeed, Tashiro was 28s ahead after 25 minutes and remained aboard deep into the window before stopping. His and Tanigawa’s chances had also been bolstered by their closest challengers serving 10 and five-second Success Penalties, which helped extend Team Scala’s lead to approaching 50 seconds.

A leisurely pitstop would have been more than enough to maintain a comfortable advantage. Instead, the team were one-second under their minimum time, which resulted in a stop-go penalty of the same duration.

They might have been okay were it not for Hiranaka who was lighting up the timing screens behind. The Mercedes-AMG emerged from its stop-go ahead of Koshido’s Toyota but was passed soon after and dropped away to eventually finish 10 seconds adrift.

Yasuoka picked up were Lee left off to maintain GTO’s podium streak ahead of Team GMB’s Mercedes-AMG, which finished fourth despite serving the maximum 15-second Success Penalty. Akiland’s Toyota won the Am class in fifth overall.