The McLaren looked set to claim Fox Motorsport’s maiden GT3 pole until 2020 champion Mitchell recorded the session’s best and fastest-ever British GT lap around Spa. The Scot’s 2m16.984s was less than a tenth quicker than Stanley’s erstwhile benchmark and just enough to set the fastest combined time across both 10-minute sessions.

GT3’s eventual front row starters began the second session in fourth and fifth, albeit with Fox enjoying a half-tenth head start over Barwell.

Both Halstead and Balon ended their runs 0.5s shy of provisional pole-sitter Paddock Motorsport, which had supersub Graham Davidson to thank for its fast start. 2019’s champion hit the front towards the end of proceedings once Enduro’s Morgan Tillbrook and 2 Seas’ James Cottingham had disputed top spot early on.

That particular battle was settled in 2 Seas’ favour when Tillbrook had his second and faster, lap scratched for a track limits infringement. Nevertheless, his banker was still good enough for third: two tenths slower than Davidson’s Q1 benchmark and a shade shy of Cottingham who wound up 0.167s adrift of Paddock’s 720S.

Behind Halstead and Balon came Team Abba Racing’s Richard Neary, who rounded out an initial top six covered by as many tenths.

Part two began with Stanley setting an electric pace to move Fox into provisional pole. His time, but not combined position, was then bettered by Lewis Williamson, Lewis Proctor and Jules Gounon before Mitchell’s first run moved Barwell’s Lamborghini to the top of the order.

Stanley wasn’t done, though, and went purple again on his next run to re-establish Fox’s advantage. And when Mitchell could only fractionally improve on his own PB the game appeared to be up.

Not so, as it turned out, for the Scot surprised everyone – including his own team – by wringing a new qualifying lap record from the Huracan on its final flying lap.

The combined efforts of Williamson and Cottingham were enough for 2 Seas to finish 0.2s adrift in third but the same amount ahead of Tillbrook and Marcus Clutton with whom they share row two.

Paddock, meanwhile, slipped from first to fifth in the second session and now start alongside championship leader Ian Loggie, who could only manage the eighth fastest Q1 time. His co-driver Gounon did underline RAM’s raw pace, though, by lapping just a tenth slower than Mitchell.

Behind, the best of the Silver-Am entries share row four after Sam Neary backed up the good work of his father to beat class points leaders Alex Malykhin and James Dorlin, who are making a one-off appearance with a Porsche this weekend.

Having never even been to Spa-Francorchamps before this weekend, Canadian driver Marco Signoretti produced a remarkable qualifying performance which, when combined with fine work by team-mate Matt Cowley, resulted in the Academy Motorsport Ford Mustang being near-unbeatable in the fight for pole. 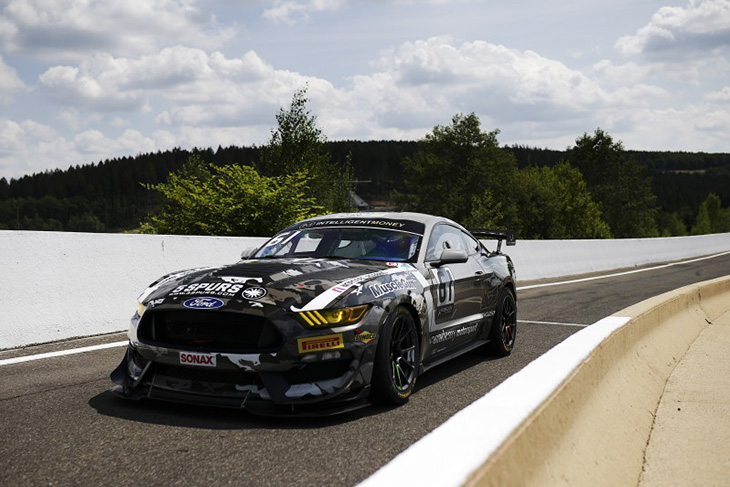 The opening segment of qualifying was shaping up to be a tightly-fought affair, with Kevin Tse first setting the top time in the guesting Herberth Motorsport Porsche 718 Cayman, only to be pipped by Jamie Day’s R Racing Aston Martin and then Jordan Collard’s Toyota Gazoo Racing GR Supra. All three were covered by just a matter of tenths, but then came Signoretti who pulled a mighty 1.2s clear of the lot with his first effort, before then improving again to eventually craft an unassailable 1.284s gap by the end of the session.

With the Pros taking over for the second segment, the likelihood of any one driver being able to overturn that deficit looked slim, but that didn’t stop a host from having a good crack at it.

Sennan Fielding did the best job in the Steller Motorsport Audi R8 LMS, putting in the best lap of the combined sessions, but even then it was only good enough to move the Audi up to second, still some 1.3s down on the Mustang’s combined time, with Cowley successfully ramming home the advantage. However, it could perhaps have been more for Steller had Richard Williams not seen his fastest lap removed for straying beyond track limits.

Josh Miller built on Day’s performance to help the R Racing Vantage to third on the grid, just ahead of Jamie Orton and Seb Hopkins’ Team Parker Racing Porsche 718 Cayman. Ashley Marshall and Moh Ritson were the fastest of the McLaren runners, with their #26 Paddock Motorsport 570S winding up fifth, ahead of Tom Edgar and Jordan Collard’s Toyota.

A special mention must go to Assetto Motorsport and its drivers Joe Wheeler and Freddie Tomlinson who will start seventh. The team worked wonders to rebuild the car after a nasty accident during FP2 that left it with heavy damage front and rear. However, both drivers put in great performances to keep themselves in the fight.

Newbridge Motorsport worked a wonder of its own, having suffered front-end damage that ruled them out of the entirety of FP2. The outright and Pro-Am GT4 championship leaders had been chasing a brake issue all weekend, but Matt Topham and Darren Turner did enough to grab eighth on the grid and claim another Pro-Am pole.

Today24.pro
Kate Middleton will take on tennis legend Roger Federer at secret location to raise money for charity Behind The Scenes Of The Sandman 10 Over The Top Boss Moves We DID NOT SEE COMING Matthew Judon Fed Up With Joint Practices? Twitter ‘Like’ Hints Feelings