AS Euros fever grips the nation, England’s women’s team are training for glory ahead of Tuesday’s semi- final against Sweden – at a resort in South West London.

On the banks of the Thames, with more than 25 acres of ­landscaped grounds, the exclusive Lensbury Hotel is in Teddington, which in 2021 was named the best place to live in­ the capital.

When training is done, the Lionesses play cards, watch Love Island and share problems in a Big ­Brother-style Diary Room, where staff encourage them to offload what is on their minds.

Midfielder Jill Scott, 35, said: “Alessia is doing my hair and she is doing a really good job. I keep saying to her, now that we’ve won our matches, I’ve got to keep my hair like this. I keep pestering her.”

The camp is clearly paying off, with 23-year-old Georgia Stanway’s extra-time winner on Wednesday seeing off pre-tournament favourites Spain in the quarter-finals. 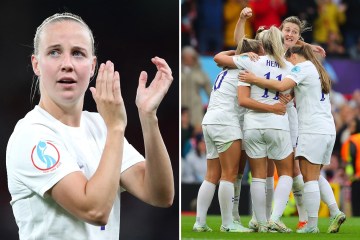 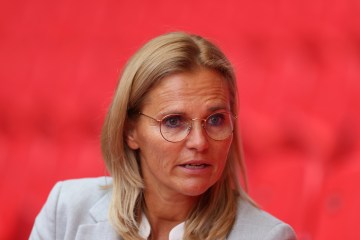 A CUP TOO MUCH

“The relaxation room is the main room for most people. In there we’ve got darts, pool, table tennis and the basketball machine.

“On days off we get to relax, wake up a bit later, come and go as we please.”

Alessia, who scored the goal of the tournament so far in the 5-0 drubbing of Northern Ireland, said: “After training we recover, have lunch, then enjoy each other’s company.

“We play cards, sit in the sun, get a coffee. There’s a group of us who play cards. It’s a nice way to switch off and play a game called Trump, which gets really competitive.”

It’s her first major tournament with England, helped by the presence of clubmate Ella Toone, 22 — the duo combining for Ella to score the crucial equaliser against Spain.

Alessia said: “Being on this journey with my best friend makes it all that little bit more special.

“Tooney’s an absolute doughnut, she has me in hysterics. I think we balance each other out quite nicely.”

Winger Lauren Hemp, 21, is the queen of the dartboard, dominating at the squad’s favourite game, Around The World, according to Man City teammate Chloe Kelly.

Chloe, 24, said: “I’ve been practising because Hempo flies away with the win every time.”

Chelsea teammates Bethany England and Jess Carter, 24, have been going head-to-head at pool.

Bethany, 28, said: “My competitive edge is quite extreme. I will get a face on if I lose.”

Players recover from matches with yoga classes, ice baths and visits to the cryotherapy chamber.

The team have conceded just once during their march to the semis, but their secret weapon might be a touch simpler — match-winner Georgia’s heroics were fuelled by a classic dinner.

She said: “My pre-match meal is a bit of a superstition, but it’s got to be beans on toast. But sometimes, when we go abroad, it’s really hard to get the beans and they end up being kidney beans, so sometimes I have to go without.”

Their success has prompted a rush for tickets to the semi-final, with an extra 2,000 tickets selling out in ten minutes on Thursday morning.

Those who do have tickets shouldn’t worry if they hear Swedish songs after the game, as Abba are a fixture in England’s post-match celebrations.

Captain Leah Williamson, 25, is the squad’s designated DJ, including on the long coach rides back to Teddington after games — with communal singing at the tops of their voices until the early hours.

As well as Abba’s hits, Proud, by Heather Small, and songs from the musical Grease are on the playlist.

Defender Millie Bright, 28, said: “Some players text r­e­quests from the back of the bus. We like the singalong vibes.”

Florida sheriffs caught on video briefing armed right-wing group before they headed to Capitol on Jan. 6