The Geordie Shore star, 32, enjoyed a night out with her best pal Sophi Kasaei at Geisha Bar & Restaurant in Newcastle.

Charlotte is expecting her first child with her boyfriend Jake Ankers, and they revealed the exciting news in April.

Charlotte shared a snap of her stylish co-ord and said she was “travelling in style” in a chauffeured car.

She later shared a sweet clip of her tenderly cradling her baby bump. 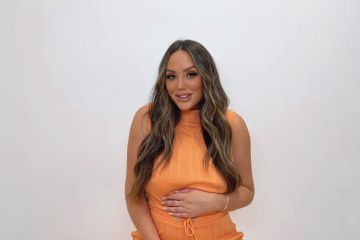 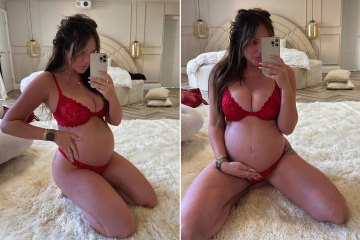 She took the opportunity to snap a mirror selfie while holding up her top and revealing a look at her bare bump.

Standing in the bedroom, the 32-year-old stood with her bump on show and smiled at the camera with her brown locks falling past her shoulders.

The snap was shared with Charlotte’s eight million Instagram followers, and she revealed plans for her pending arrival.

She penned: “Weekends at home with BUMP. Today we have : MADE A START ON THE NURSERY.

“Dug out the garden furniture. And started making a list of all the jobs we need to do in the garden for the baby shower. Feel like I’m nesting I’m constantly looking around the house thinking hmmmmmm I need to do this or that!”

Charlotte added that she “can’t describe the happy feeling” doing all the things she is for “the next chapter of her life.”

She added: “wow wow wow it’s all so exciting I’d follow @thecrosbymanor my home account if you wanna have a nosey at all the sneak peaks.”

The reality star’s candid snap follows others the star has shared of her bump, including one as she strolled down the beach in Sunderland earlier this month.

The Newcastle star – who was spotted filming for her new BBC reality TV show – accessorised her flamboyant outfit with a rhinestone belt and ankle bracelet.

Despite the scorching temperatures, she looked in good spirits as she strolled along the beach barefoot.

Colorado homeowner emptied pistol to kill bear that broke in

Today24.pro
Kate Middleton will take on tennis legend Roger Federer at secret location to raise money for charity Behind The Scenes Of The Sandman 10 Over The Top Boss Moves We DID NOT SEE COMING How Charlize Theron and KiKi Layne Spar in The Old Guard Anatomy of a Scene