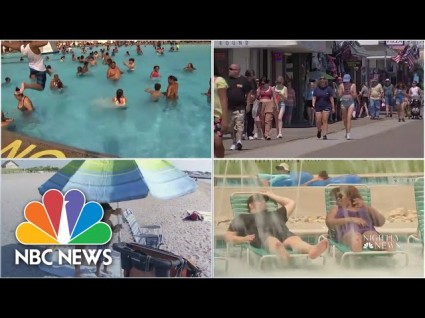 Extreme weather is hitting us over the head with a sledgehammer, trying to get our (and Joe Manchin's) attention. Via the Washington Post:

More than 80 million Americans remain under heat alerts as punishingly high temperatures keep their grip on the Lower 48 through the weekend.

Readings near or past 100 degrees stretch from the border of Mexico to the border of Canada on Friday. Over the next week, 85 percent of residents in the Lower 48 could experience temperatures of 90 or higher, with nearly 20 percent reaching or surpassing 100.

Heat advisories centered on Missouri cover parts of 13 states in the central and southern Plains into the mid-South. Additional advisories are up for much of the northeast urban corridor. Excessive heat warnings are also in effect Friday for 10 million people in the desert Southwest.

Here in Philadelphia, we had 88% humidity the other day during this soul-sucking heat wave.

Millions of Americans have been living through a heat wave this week as parts of the West to New England see dangerously hot temperatures, but many don't have resources to weather it https://t.co/hQ1U1pkpUZ

Youth mental health is in crisis. Are schools doing enough?