VICTORIA Beckham showed off her incredible figure as she cosied up to husband David on a jet-ski in Corsica.

The fashion designer, 48, sizzled in a red strappy bikini and a pair of shades for some water sports with her hubby.

The couple have been enjoying a family holiday on a £1.6m-a-week luxury yacht this week.

Victoria was seen tightly gripping her husband, who was sitting in the driving seat.

David beamed at the camera, while Victoria looked glamourous as ever with a black cap covering some of her face.

They admired the stunning Corsican coasts and looked to be racing with Cruz, 17, and his girlfriend Tana Holding on the jet skis. 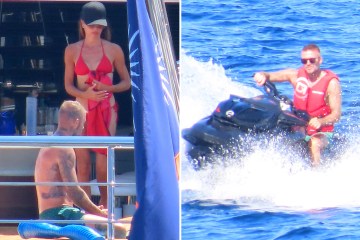 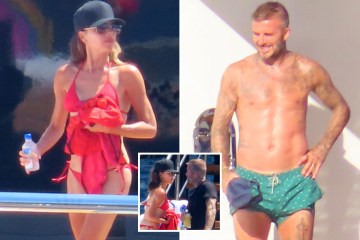 Victoria captioned the photo: “Yes, that’s right… @davidbeckham got me on a jet ski

The pair were spotted having the time of their life as they enjoyed the activity.

Spice Girl Posh looked sensational in the striking swimsuit as she enjoyed the luxury getaway.

Paddy and Christine's marriage from ‘cheating’ to pics with Nicole Appleton

Yesterday, Victoria and David were seen in Saint-Tropez with Cruz, Harper and some friends.

Earlier this week, she was seen admiring the view onboard the boat during the getaway, particularly that of her hubby.

She shared a topless snap of him on Instagram earlier in the week and told fans “you’re welcome”.

The superstar pair rubbed shoulders with royalty when they docked on the Amalfi Coast.

They bumped into Duchess of York Sarah Ferguson at a seafood restaurant.

Back in December, the Beckhams splashed out £5million on their own yacht.

David took the plunge after being inspired by maritime getaways with Sir Elton John and hubby David Furnish.

A source said: “David had a look around some yachts in the summer, and decided to treat himself.

“He helped design the boat himself, and has been incredibly hands-on with everything.

“It’s not an oligarch-stylee super-yacht, but it’s still pretty plush by anyone’s standards.

“He was inspired after holidaying with Elton and David on their boat – and loves life on the water.”

David is understood to have bought a Ferretti following a visit to the Italian shipyard’s HQ in Forli.

Victoria treated fans with topless snaps of David earlier this week[/caption] They have been enjoying a family holiday on a £1.6m-a-week luxury yacht[/caption]