AN etiquette coach has revealed three things you should never do while out shopping for clothing.

Maria Liassides, a London-based etiquette coach, took to TikTok to promote good manners and offer tips to anyone looking to purchase new articles of clothing or shoes.

According to the TikTok user, people should never try on shoes without socks on, never talk on the phone while shopping, and never leave an item in the wrong spot.

Maria, who also offers various other types of etiquette tips on her page, advises in one of her videos that shoppers should put their phones on silent mode while shopping in stores.

In the short video clip, Maria pretends to talk on her phone inside a store, prompting a nearby shopper to appear annoyed.

The solution appears easy as she suggests people keep their phones on silent mode and inside their pockets or purses. 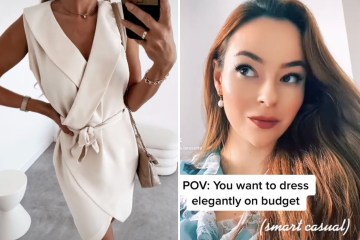 In another “store edition” etiquette video, shared on TikTok by Maria, the well-mannered woman advises people to carry clean socks to the store.

She suggests shoppers put on a clean pair before putting their feet inside a new shoe.

Lastly, in a 17-second video, Maria shows herself picking up a jacket in one part of the store, and putting down a different article of clothing in a spot where it doesn’t belong.

“If you change your mind, return the item to its place,” she explains in overlay text, as she walks a black puffy jacket to a rack where identical jackets are hanging.

In response to the video about putting items back where they go, one TikTok user commented: “I always put items back in correct place AND in size order.”

Another said: “I always do this and get my children to do it too. It’s just the right thing to do.”

A third commented: “I am guilty now and again, I do appreciate though how soul-destroying this must be on a daily basis for shop workers. it’s a lack of respect in a way.”

Meanwhile, elegant expert Amira Bessette took to TikTok to share some staple pieces that will make you look like a million bucks without spending $100.

Showcasing a vast amount of items from shops such as Shein, H&M and Zara, Amira guides us on how to present more elegantly.

And another TikTok has revealed her reason for washing new clothes before wearing them.

In a since-deleted TikTok that was archived on YouTube, one former employee of a major American department store says: “Any time that you buy clothes from any kind of store, wash them as soon as you get home. Wash them in hot water.”

Today24.pro
Fulton vs Akhmadaliev next is a no-brainer, but will we get it? Canelo Alvarez blasts ‘a**hole’ Gennady Golovkin as he prepares for third fight with boxing rival Royals vs. Athletics Friday game thread A 757-acre Scottish island that comes with a mansion and a whale skeleton nicknamed 'Bony Dick' is on sale for just over $2 million