KYLIE Jenner is still keeping it real, showing off her post-baby body in new unedited photos.

The group were spotted grabbing lunch at a Mexican restaurant in Calabasas.

The billionaire businesswoman wore all black during the lunch outing, showing off her arms and elbow skin.

Kylie has been spotted unnaturally natural over the past several days, including an unedited photo of the reality star’s body Travis snapped, then quickly deleted, while she cooked for the rapper.

In the snapshot, Kylie, 24, appeared to be perking up her booty while standing in front of the stove. 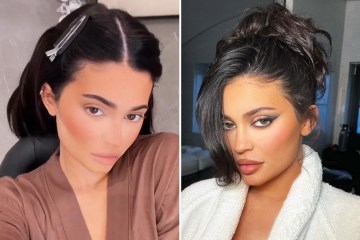 Kylie also tied her long brunette hair into a ponytail.

She held a plate in one hand and a cooking utensil in the other.

The TV star might have been unaware that Travis was taking a photo of her post-baby body.

The rapper captioned the photo: “Shawty in here throwing that sh*t down!”

Earlier, Kylie also gave a rare peek at her 4-month-old son in honor of Father’s Day.

The pair were wearing adorable matching Nike sneakers as they stood facing each other.

Only their feet were shown in the photo as they stood outside.

Travis wore long, brown pants while their 4-month-old had on tiny gray shorts.

To celebrate the day, Kylie decorated her $36million LA mansion with hundreds of pink, black and gray balloons and letters spelling out “HAPPY DAD’S DAY”.

Kylie set up the huge balloon arch against the floor-to-ceiling glass windows in the living room.

Outside, she lit dozens of white pillar candles and placed them in glass jars along the doors.

Their daughter Stormi, four, was seen in the yard making paintings for Travis on several canvases set up on wooden easels.

One was a sweet painting of her and Travis together in green paint, which she had labeled, “Daddy” and “Stormi”.

While Kylie and Travis still have not announced their new child’s name, fans think they finally figured it out after spotting a clue in the background of a new video for Father’s Day.

In the background of the video, the easels were set up for crafts and cards alongside a table of glasses.

On the easel, there was a drawing that some fans think was made by Kylie and Travis’ daughter Stormi.

But fans are still waiting for a final confirmation, after sources claimed she and Travis weren’t keen on the child’s original name Wolf after spending some time with him.

An insider told People: “Kylie and Travis liked Wolf, but after getting to know their son, they felt like the name didn’t fit him.

“They wanted to choose the perfect name that they both loved.”

The source added that Kylie will “share his name when she’s ready.”

Kylie is out to lunch[/caption] Travis shared, then quickly deleted, a natural photo of Kylie cooking[/caption] Kylie also shared an adorable snap of young son and Travis Scott on Father’s Day[/caption]

Good historical fiction is not just about factual accuracy, but the details of human experience too