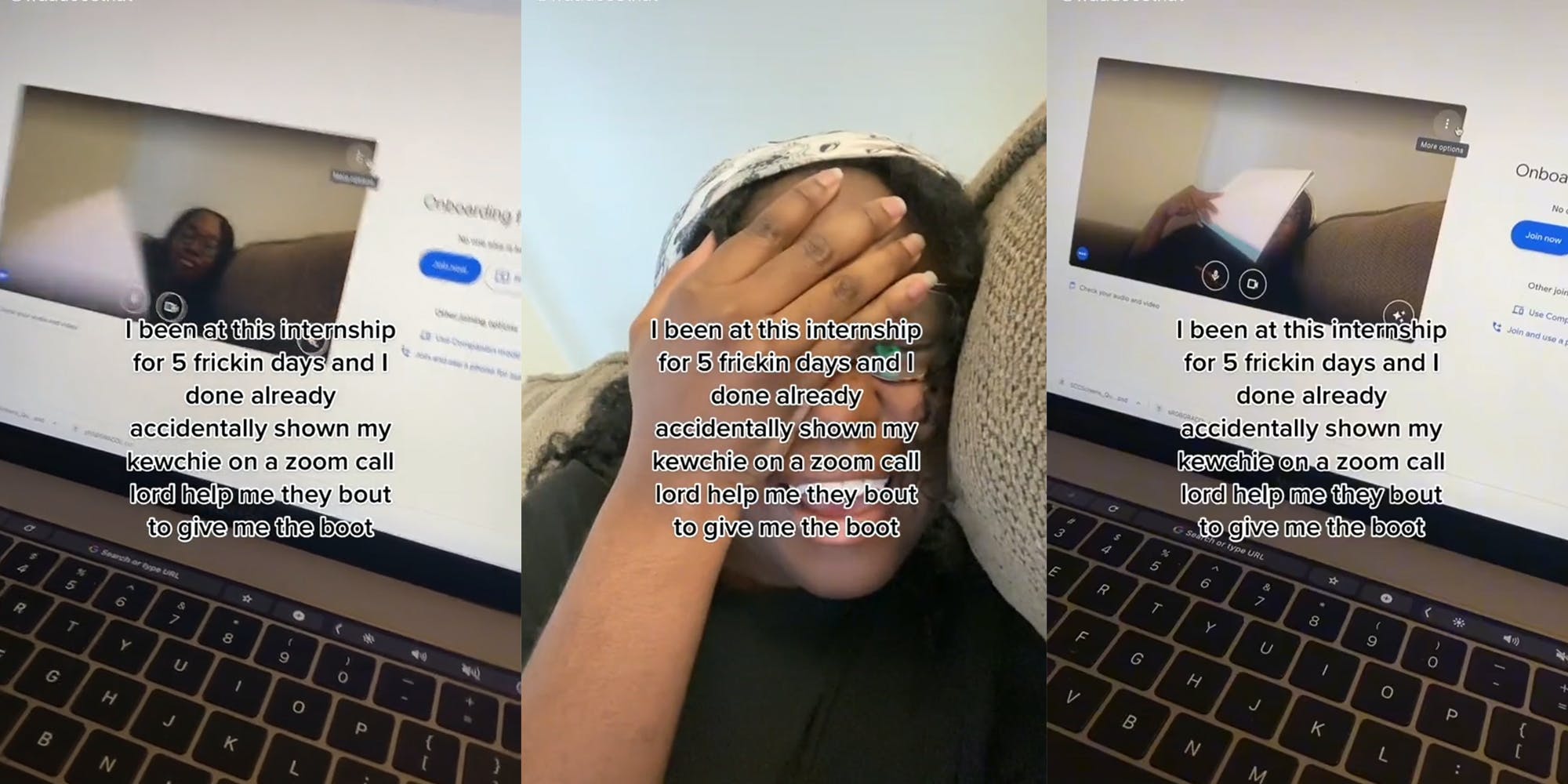 A TikToker says that she accidentally flashed her co-workers during a Zoom meeting at her internship.

Waa (@waadoesthat) on Friday posted a TikTok about the incident. In it, she says that she had been at her internship for five days before accidentally flashing her co-workers on camera.

“Lord help me they bout to give me the boot,” Waa wrote in the video’s overlay text.

“My man said nobody probably noticed so imma stick with that,” Waa commented on the TikTok.

In a follow-up TikTok, Waa explained that she tilted her computer down toward her lap when she was on camera to look for a pen behind the laptop’s screen. She also clarified she was not wearing pants or underwear at the time.

Commenters on Waa’s viral video shared similar experiences they’d had while on video calls with employers.

“I flashed a hiring group once when I thought my camera was off,” @babygirlrilakkuma commented.

“When I was on my internship I was on call with my ex and we were talking really… suggestively and I was unmuted,” @laurel_hell wrote.

“One time I joined a zoom call and my virtual background was (not explicit but definitely romantic) Star Wars fanart,” @klaudiasays commented.

Others gave Waa advice to help her prevent repeating her mistake.

“10/10 recommend ordering a cheap folding desk from Amazon to avoid this in the future,” @yourslvesfavegurl wrote.

“I am begging y’all to go on amazon & buy them little sliding camera covers,” @yalldontwashyalegs commented.

Some said how embarrassed they’d feel if they were in Waa’s position.

“They wouldn’t need to boot me ‘cause that would’ve been my last day on earth,” @bearlyreads wrote.

“I’m sorry but I would literally be looking at flights out of earth right now,” @gezglen commented.

The Daily Dot reached out to Waa via contact form.

The post ‘My man said nobody probably noticed so imma stick with that’: Intern accidentally flashes co-workers during Zoom meeting  appeared first on The Daily Dot.

Mosques Were Promised Protection Against Islamophobia – Where Is It?

3 reasons Lakers trading Westbrook for Kyrie seems likelier than ever