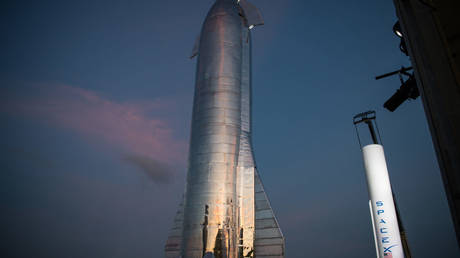 Landing a rescue force at a US embassy in Africa threatened by a Benghazi-style siege is just one of the potential military uses for Elon Musk’s Starship vessels, according to an internal military report made public on Monday. The document pertains to the 2020 cooperative agreement between SpaceX and the US Transportation Command (TRANSCOM), but remains a wish list as the Starships are nowhere near ready for actual operations.

That TRANSCOM had partnered with SpaceX back in October 2020 was public knowledge, as the US military actually announced it at the time. Officially, the Defense Department wanted the capability to move the equivalent of a C-17 payload – just under 80 tons, or a single M1 Abrams tank – “anywhere on the globe in less than an hour.”

As it turns out, the Pentagon had additional ambitions, according to the “midterm report” on the program obtained by the Intercept through a Freedom of Information Act (FOIA) request and published on Monday.

A fleet of military Starships could provide “an alternative method for logistics delivery” in the Pacific, or deliver “a collection of shelters, vehicles, construction equipment and other gear” anywhere in the globe on short notice, so the US Air Force could stand up an airbase.

The third imagined scenario, titled “Embassy Support,” envisions “rapid theater direct delivery capability” from the US to an embassy in Africa, potentially involving a “quick reaction force.” The mere demonstration of such ability “could deter non-state actors from aggressive acts toward the US,” the military said.

While the report itself does not make such a comparison, the scenario overlaps quite a bit with the attack on the US compound in Benghazi, Libya – where an ambassador and three security contractors were killed on September 11, 2012 as they waited for a rescue force that never came.

While SpaceX has not commented on the story, TRANSCOM spokesperson John Ross told the Intercept the military believes a rocket-deployed rapid reaction force would be “possible within the next 5-10 years.”

The Starship is still in its experimental phase. The first-ever successful landing of a prototype only took place in May 2021, after a series of tests that ended in fiery explosions. In addition to technical challenges, Musk is also dealing with the federal bureaucracy and the process of getting permits for launching tests from the SpaceX facility in southern Texas.

The Federal Aviation Administration (FAA) gave SpaceX preliminary environmental approval last week, but to get the full approval license the company will need to prepare “a historical context report … of the Mexican War” and fulfill 74 other demands, according to National Geographic. Even then, the FAA license would cover only ten launches a year. Moreover, the authorities are concerned SpaceX lacks “a strong safety culture,” according to a FAA report leaked in June 2021.

Australian Authorities Urge Residents to Evacuate Ahead of Flash Floods

Today24.pro
UConn lands 4-star shooting guard Solo Ball US tennis player Taylor Fritz pulled off an amazing diving shot at Wimbledon that was so good his opponent had already started celebrating winning the point ‘Our strong bond was the most special part’: top-10 Badminton horse dies, aged 25 The Untold Story Of Chris Hemsworth