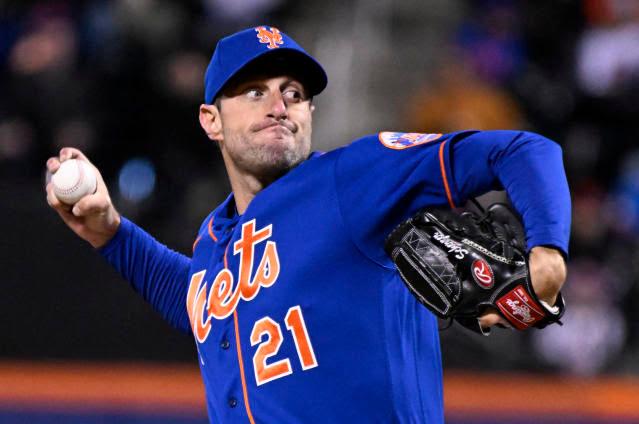 This week could be the last week where Max Scherzer isn’t on the Mets’ active roster. Jon Heyman and Mark W. Sanchez of the New York Post report that Scherzer is at least in consideration to start Sunday’s game in Miami. The three-time Cy Young Award winner left the team’s game on May 18 with what was described as a moderate-to-severe oblique strain, which many suspected would keep him out between six-to-eight weeks. Sunday would mark exactly five-and-a-half weeks since the injury was sustained.

The Mets dropped the third game of their series with the Marlins, 6-2. The Mets held a 1-0 lead entering the seventh inning, but after Chris Bassitt got into trouble, Seth Lugo served up a grand slam to Jerar Encarnacion for his first hit in the majors. The Mets look to take three of four from the Fish tomorrow, with David Peterson (3-1, 3.60 ERA) taking the hill against 2021 All-Star Trevor Rogers (3-5, 5.87 ERA). First pitch is scheduled for 1:10 in the afternoon.

The Mets also had players representing Juneteenth by wearing MLB’s licensed gear that honors the holiday.

The Dodgers immortalized southpaw Sandy Koufax with a statue outside of Dodger Stadium. Koufax and Clayton Kershaw both spoke to Fabian Ardaya of The Athletic about what the statue means to them.

In more news out of the Dodgers, the team placed former MVP, Mookie Betts, on the injured list with a fractured ribcage. Utility man Zach McKinstry was recalled and reliever Reyes Moronta was sent to Triple-A as southpaw Andrew Heaney was activated from the IL.

Blue Jays fire-balling prospect Nate Pearson left his start with Triple-A Buffalo after just two pitches. Keegan Matheson of MLB.com reports that the righty sailed a fastball, which prompted the catcher and training staff to be alarmed.

The Pirates are calling up one of their top prospects, shortstop Oneil Cruz, according to Robert Murray of Fansided. The six-foot-seven-inch Cruz debuted last year and went three-for-nine with a home run and three RBIs. While Cruz is only hitting .233/.337/.424 in Triple-A Indianapolis this year, he has nine homers and 35 RBIs and has picked up the pace lately.

ESPN released a film about Dan Bryan, who lost his son Ethan in a car accident in September of 2020. Bryan spoke about reading a book about playing catch that was written by another man by the name of Ethan Bryan, and the healing power of playing catch with other people. When Bryan plays catch, he uses Ethan’s glove.

James Villani breaks down what went wrong in the Mets’ loss to the Marlins.

2006: The Mets smack four homers, including one by starting pitcher Steve Trachsel, as they down the Reds by a score of 9-2. Xavier Nady hits two homers. while Carlos Delgado cracks his 20th long-ball of the season.

2008: Longtime Boston outfielder Trot Nixon hits his first (and only) homer as a Met, as the Mets down the Rockies at Coors Field, 7-2. John Maine allows just six hits and a Jeff Baker two-run homer in 6 2/3 innings, while the Mets attack Aaron Cook for six runs and 12 hits in seven innings.

2012: The Mets finish off a three-game sweep of the Orioles at Citi Field. Dillon Gee allows just two runs on three hits and two walks, and Frank Francisco escapes a bases-loaded jam by getting Brian Roberts to ground out to end the game.

'Why was he so worried?' Congressional reporter zeroes on in key J6 question Kevin McCarthy is stonewalling