TAMMY Hembrow has shared a sweet snap of her baby girl with her two children, days after the newborn’s birth.

The model took to Instagram to post the adorable photo of her kids gushing over their new sibling.

Tammy Hembrow shared an adorable photo of her two older children holding their new baby sister[/caption] Tammy announced the birth of her daughter over the weekend, but did not disclose her name[/caption] Meanwhile, Tammy’s ex-BFF Kylie Jenner has yet to reveal her over 4-month-old son’s name[/caption]

Tammy snapped the pic from above showing her son, Wolf, six, and daughter, Saskia, four, holding their sister, who had just arrived home from the hospital.

Saskia cradled the tot in her arms as Wolf admired his sister, who was donning a salmon-colored onesie and a large white bow.

The older kids also wore their pajamas during the special moment.

Tammy expressed her love for her children in the caption, writing: “They love her so much already [insert white heart emoji] my 3 babies.” 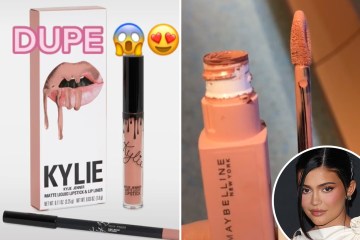 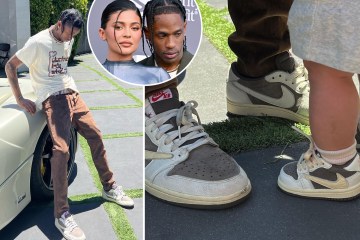 The new mom of three shared another snapshot of her snuggling with her daughter, who was fast asleep on her chest.

Tammy announced over the weekend that her “perfect little girl” was born in an emotional Instagram post.

This means that if an individual had given birth via C-Section twice, their provider might consider a vaginal birth, according to the American Congress of Obstetricians and Gynecologists (ACOG).

Tammy described the third birth as the “absolute hardest yet most rewarding thing I’ve ever done.”

She teased her followers that there was a “birth story to come.”

The 28-year-old concluded: “For now just resting in my love bubble with my perfect little girl.”

In the series of images, the Saski founder held her crying newborn daughter in her arms.

Tammy broke down in tears as she was surrounded by loved ones.

This is her first child with her fiancé, Matt Poole.

She shares her older children with her ex-fiancé, Reece Hawkins.

While fans are waiting for her to announce the newborn’s name, Tammy’s ex-BFF, Kylie Jenner, has yet to reveal her son’s name – more than four months after his birth.

Eagle-eyed social media users have been trying to guess the youngster’s moniker from her recent posts.

Kylie took her followers behind the scenes of the party for her baby daddy Travis Scott which included gold balloons that spelled out: “Happy Dad Day.”

In the background of the video, some easels were set up for crafts and cards alongside a table of glasses.

On the easel, there was a drawing that some fans think was made by Kylie and Travis’ 4-year-old daughter Stormi.

A second shared: “Kylie Jenner’s such a real one for Twilight if she really went from naming her son Wolf to Jacob.”

The Kylie Cosmetics founder initially named her son Wolf before retracting the moniker after receiving backlash that she copied Tammy’s eldest child’s name.

Following Kylie’s announcement of the name change, sources claimed she and Travis weren’t keen on the name Wolf after spending some time with him.

An insider told People: “Kylie and Travis liked Wolf, but after getting to know their son, they felt like the name didn’t fit him.

“They wanted to choose the perfect name that they both loved.”

The source added that Kylie will “share his name when she’s ready.”

Teenagers far likelier to get addicted to cannabis than adults, study suggests

Today24.pro
SANDCAST: Deahna Kraft only knows one speed, ‘All in, or nothing at all’ Lonnie Walker to Lakers Canadian Wood Council mass timber fire test performed as expected McGregor vs. Masvidal chances heating up