BRITTANY Cartwright showed off her major weight loss in a sexy swimsuit while celebrating Father’s Day with her family and friends.

The Vanderpump Rules star said at the start of the year she wanted to shed her baby weight, after welcoming son Cruz with husband Jax Taylor last April 2021.

On Sunday, the 33-year-old and her 42-year-old husband hosted a pool day, and Brittany wowed in a green one-piece with a plunging top.

She smiled proudly as she stood next to Jax, holding their one-year-old child.

Also enjoying some fun in the sun were friends and co-stars Lala Kent and Scheana Shay, along with their respective young ones. 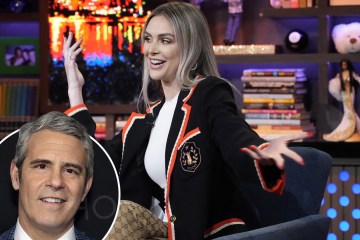 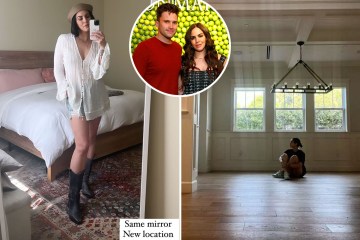 In March, she shared an update on her health and fitness journey, showing off her fit post-baby body in a low-cut sports bra and tight workout shorts, both in a matching black-and-white polka dot print.

She wore her brown hair up in a tight bun and gave a big smile for the camera as she leaned against her exercise bike.

The Vanderpump Rules star showed off her toned arm and legs, as well as a glimpse of her stomach in the revealing bra top.

Weeks after she’d given birth last year, Brittany slammed trolls who scoffed that she “still looks pregnant” in a red carpet photo with her husband Jax.

She shared a snap with him from the premiere of Midnight in the Switchgrass, where she wore a red wrap dress, and captioned it: “I keep seeing the comments that I look pregnant here.

“Well guess what? I probably do—I just had a baby 3 months ago, and my body is healing and I’m working hard to get back in shape.”

Shortly before that, the star had revealed that she’d been left in tears by cruel comments from online trolls about her pregnancy weight gain.

The new mom told Us Weekly that the comments had made her feel “ashamed” of her post-baby body compared to her costars, like Lala Kent, Stassi Schroeder, and Scheana Shay.

She said: “When I was pregnant, I got so many mean comments about what my weight gain was.

“I was being heavily compared to Stassi and Scheana and Lala. I’ve always been bigger than them, but my weight has always fluctuated and stuff.

“So it was just hard to see all those comments about my weight stuff when I was healthy and the baby was healthy.”

The Bravo star added: “You’re already so emotional. And then I was in quarantine, I was home, so I was looking at my phone more than I should have.

“There were times when it made me ashamed of how I looked, and I shouldn’t have felt like that.”

Toyota-Suzuki alliance drives past the failure of others