DAYS of Our Lives fans have revealed that they think they know who killed Abigail and are sharing their wild new theories.

The legacy character was murdered on the long-running soap opera earlier this month.

Since Abigail Deveraux’s (played by Marci Miller) death, Salem’s citizens have been working to find her killer – or trying to fight off being a suspect themselves.

She was discovered unconscious by her husband Chad and was later declared dead from stab wounds to her stomach.

Viewers were left furious by the news that Abby, a legacy character, was killed off the show.

Now, they’re just trying to do their part in discovering who killed her. 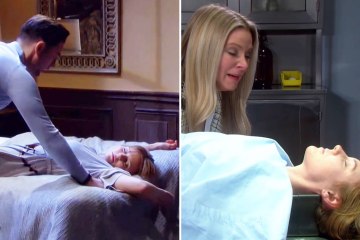 KILLER ON THE LOOSE

What to know about Abigail's killer on Days of Our Lives

Days of Our Lives fans have been sharing their wild theories on who Abigail’s murderer is, or if they even think she’s been truly murdered at all.

There are many suspects in fans’ minds, and all for different reasons.

Sarah Horton is at the top of that list.

One DOOL viewer guessed on Twitter: “Sarah pulls a knife on Chanel?!

“I swear she is going to be Abby’s killer. Unless they are trying to throw us off.”

Another wondered: “Omg what if Sarah killed Abigail because in a hallucinogenic fog she thought she was defending herself from kristen????

A third insisted: “It was Sarah. Remember she said she had some blackouts recently?

Still, some fans still think one of the others on that suspect list might actually be the true killer.

One sure fan wrote: “LUCAS MURDERED ABBY PREDICTABLE HE HAS THE CUT ON HIS HAND WE BEEN KNEW HE DID IT.”

Another decided: “I think Gwen did it but she had help.

“Remember she was on the phone with an anonymous person saying, ‘I need help.’ It wasn’t Leo – was it Kristen??”

A second agree, replying: “Good point. She may have wanted Kristen to return the favor and break her out of jail.

Another fan speculated: “Knowing the way Ron writes things, my theory is that it’ll end up being Clyde or someone completely random like Li Shin.”

Many other viewers also think the killer might be someone fans wouldn’t think of – either a minor character or one they haven’t yet met.

No matter who killed Abby, fans and her portrayer, Marci, alike, are just upset that she was even murdered in the first place.

In an interview with Soap Opera News, the actress blasted the show for getting rid of her character.

She said there were plenty of ways for the soap to handle her not being able to work full-time, aside from killing off the character.

“I just had a really hard time with the decision honestly,” she said of her decision to leave, before adding of the show, “I mean, there are a variety of opinions about how to handle this.”

Referring to another of Abby’s portrayers, Marci said: “I have no idea what Kate’s [Mansi] schedule looked like or anything but I honestly thought that they would recast and should recast.”

Marci said she was absolutely “floored” when she learned they decided to get rid of Abigail instead.

Marci Miller, who portrayed Abby, recently blasted the show for killing her character instead of having the role recast[/caption] Abigail was stabbed to death on the show, and fans were furious[/caption]

Nintendo fan reportedly spent $40,000 on stock to ask about F-Zero