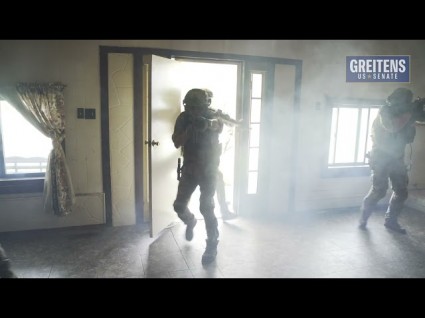 The disgraced Eric Greitens, now a Republican Senate candidate in Missouri, has released a new campaign ad that features him armed and backed by a militia squad storming a house occupied by a 'Republican in name only.'

The ad offers a "RINO License" to Republican primary voters, to purge any Republican that isn't in the MAGA cult.

Releasing a violent MAGA fever dream that looks to slaughter his political rivals -- coming on the heels of the latest mass murder of school children in Uvalde, Texas -- is sick.

Greitens then cocked what appears to be a high-powered shotgun.

Greitens is flanked by a heavily armed militia squad that breaks down a door and storms into a house.

Greitens says, "Join the MAGA crew and get a RINO hunting permit. There is no bagging limit, no tagging limit. It doesn't expire until we save our country."

The Trump cult is not only hunting Democrats. Any Republican that doesn't fall into line will be purged.

Greitens is also facing claims by his ex-wife of physically abusing her, add this to his insane list.

The Possibility Of A Chinese Base In Cambodia: Reality, Rationale, And Impact – Analysis