The third season of the ITV crime drama McDonald and Dodds premiered on Sunday evening.

Before long, the crime-solving team was getting stuck into another murder investigation in the city of Bath.

However, the detective duo weren’t the only familiar faces to return to the small screen last night.

McDonald and Dodds viewers were shocked to see former Coronation Street star Catherine Tyldesley in the episode, too. 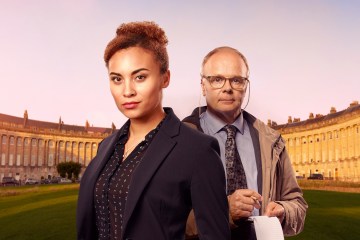 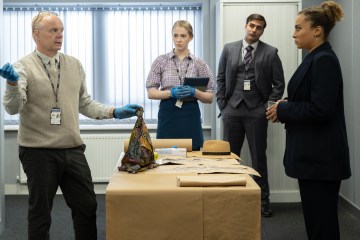 McDonald and Dodds: The full cast of the ITV drama

Catherine, 38, is best known for playing Eva Price in soap from 2011 to 2018. The actress left Corrie’s cobbled streets to pursue other acting opportunities, namely serious dramas.

In last night’s episode of McDonald and Dodds, Catherine played the murderer Kate. However, viewers were quick to point out how much the actress changed for her role in the drama.

She’s no longer Corrie’s blonde bombshell barmaid: Catherine donned mid-length brown hair in the episode. That wasn’t her only change, though.

She also debuted a “posh” accent which surprised viewers who were used to her Manchester drawl.

“Took me ages to figure out that George’s gf was Catherine Tyldesley from Corrie. With the different look and that posh accent I hardly recognised her,” one viewer commented.

“Who knew Catherine Tyldesley was so posh!” another viewer exclaimed.

Another added: “A rather posh Catherine Tyldesley #McDonaldAndDodds.”

The episode later explained the reason for Kate’s posh accent, though. While proving that she was the murderer, DS Dodds revealed that Kate took elocution lessons when she moved to Bath, which is how she met George Gillian (Alan Davis, 56), a wealthy bachelor she planned to scam.

Along with the actress’s new accent, viewers also noticed a blunder in the script, which was spoken by Catherine’s character. In the episode, Kate told the detectives that she originally hailed from Crawley in Surrey.

Eagle-eyed fans spotted the geographical error in this statement and took to Twitter to point out Crawley isn’t in Surrey.

“Rookie error in #McDonaldAndDodds – Crawley is not in Surrey!” one viewer said.

Another viewer explained: “Crawley is NOT in Surrey, it’s in West Sussex!”

McDonald and Dodds continues on Sunday at 8pm on ITV.

Air travel is a hot mess. There’s not much the government can do about it.

'May be one of the biggest threats to Trump yet': Legal expert shocked by latest Jan. 6 hearing revelation

Today24.pro
Lonnie Walker to Lakers Canadian Wood Council mass timber fire test performed as expected Athletics’ Adrian Martinez will get starting assignment in Seattle SANDCAST: Deahna Kraft only knows one speed, ‘All in, or nothing at all’