A HOMEOWNER has caught a mysterious figure on video using their Ring doorbell and no one can be sure what it is.

The grainy black and white footage make it difficult to make out just what’s crawling around outside.

The figure crowding the camera is rigid but moves smoothly.

The tip of the figure is reflective and gangly.

The camera has a small field of view, so it’s impossible to tell just how large it is.

When the homeowner turned the light on, they said they could not see the figure – it was only visible through the camera. 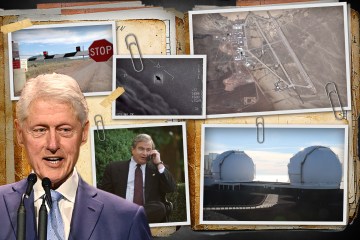 I sent agents to see if there were ALIENS at Area 51, says Bill Clinton

“It’s a bug antenna that’s just on the camera so it looks bigger than it is,” one TikTok commenter wrote.

“I’ve seen plenty of snakes do this, poised ready to strike when they smell prey,” another commenter added.

The video’s original poster says they hail from Tennessee but does not state where this particular video was shot.

Snakes are more active in Tennessee during the late spring and early summer as the reptiles breed, according to A-Z Animals.

Some commenters had more other-worldly explanations for the mysterious sighting.

“It’s like some alien metal detector,” one TikToker said.

There were also references to the film War of the Worlds, which featured serpent-like aliens wreaking havoc on Earth.

While an alien mystery could be exciting its best not to let imaginations run wild.

Reason says the figure was probably a bug antenna or some other prowling wildlife.

Roe was a bad ruling that always had to go

Denzel Washington Will Add Another Award To His Roster: The Presidential Medal Of Freedom

Today24.pro
Lonnie Walker to Lakers Christian Thun faces Curtis Harper on July 9 ProBoxTV card in Florida SANDCAST: Deahna Kraft only knows one speed, ‘All in, or nothing at all’ Athletics’ Adrian Martinez will get starting assignment in Seattle