AMANDA Holden showed off her toned legs on a windy day in the capital.

The Heart Breakfast host, 51, wowed in a neon blazer dress with a daring thigh split.

A strong gust nearly revealed a little more than Amanda was expecting as she sauntered near Leicester Square.

Her plunging dress, which was fastened by one button at the navel, showed a glimpse of her waist through its cut out sides.

The BGT star finished her outfit with black shades and a small cream handbag.

Amanda is making the most of vibrant colours this summer. 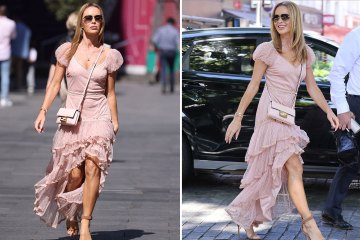 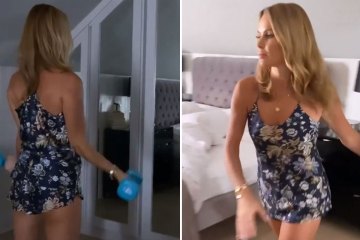 Amanda Holden slips out of bed in slinky nightdress

On Friday she threw it back to the 60s with a stunning psychedelic dress for the hottest day of the year so far.

As temperatures soared, Amanda paraded in a colourful, eye-catching frock.

She tied her hair back, wore vintage shades and carried a small orange clutch.

The beaming star looked to be loving the sunshine, smiling after her stint on the airwaves with Heart.

The attention-grabbing outfit choice came after she wowed in a yellow bikini alongside friend Davina McCall for a JD Williams shoot.

The famous duo have been brand ambassadors for the company since last year.

The TV pals have been trailblazers when it comes to representing stylish and confident older women.

Fifty-to-60-year-olds spend nearly four times as much on fashion as those in their twenties, according to market research company Euromonitor.

So retailers would be unwise to ignore them.

And people over 55 are more likely to have the most savings, too — with an average of around £20,000 stashed away, according to financiallyhappy.ltd.

“People in their 50s have more disposable income and  want to buy quality clothes which are more expensive than, say, Boohoo or In The Style,” says brand and style expert Nick Ede.

It means that the margins for profit are much greater.

“Women in their 50s want to look and feel good and fashion is a great way to do that.”

Research from JD Williams’ 2022 Womankind report shows almost half of women aged over 45 believe they are in their prime.

Striking out doping: WBSC renews and extends partnership with the ITA