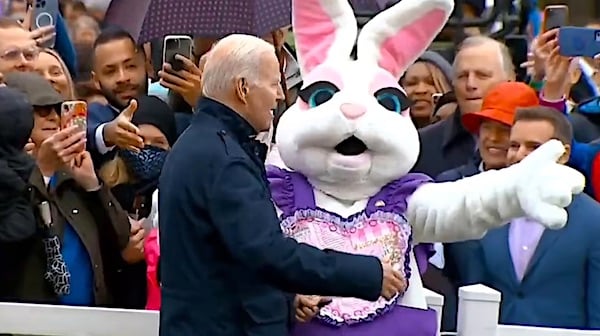 Republican Sen. Mitt Romney called out what is obvious to any political analyst as President Biden's approval from a core constituency continues to sink: His openness to canceling a substantial portion of the $1.6 trillion in student loans owed by 43 million people looks an awful lot like a bribe.

"Other bribe suggestions: Forgive auto loans? Forgive credit card debt? Forgive mortgages? And put a wealth tax on the super-rich to pay for it all," he wrote. "What could possibly go wrong?"

During the 2020 presidential campaign, Biden supported canceling up to $10,000 of debt per student, but he's now open to forgiving a much larger amount, according to a California Democratic congressman who was with the president Monday in a meeting of the Congressional Hispanic Caucus.

Desperate polls call for desperate measures: Dems consider forgiving trillions in student loans. Other bribe suggestions: Forgive auto loans? Forgive credit card debt? Forgive mortgages? And put a wealth tax on the super-rich to pay for it all. What could possibly go wrong?

The congressman said Biden "never mentioned an amount nor did the president say that he was going to wipe out all student debt."

"He did a dialogue with us about the differential between young people who went to public schools or private schools and we CHC members said he should focus on both," Cardenas said.

A poll released Monday found Biden's approval rating was down to 41% among young Americans, a drop of nearly 20% from one year ago.

In an assessment Wednesday of Biden's "younger voter problem," the left-leaning Axios cited an activist who said young people "feel they are let down in this moment, due to [Biden’s] lack of executive action, and changes that young people care about, namely, the student debt crisis, and the failure to eliminate and eradicate some student loan debt."

Dakota Hall, the executive director of the political advocacy group Alliance for Youth Action, told Axios the "continuation of the delays, while providing economic relief to some young Americans, it’s not enough."

"It’s not what they voted for," Hall said.

About a third of young Americans have student debt, according to the Education Data Initiative.

That date coincides with the new expiration date, set earlier this month, for the pandemic-related pause on federal student loan payments.

Members of Biden's far-left flank in Congress, including Reps. Alexandria Ocasio-Cortez, D-N.Y., and Ayanna Pressley, D-Mass., want the president to use executive action to cancel at least $50,000 in debt per borrower.

Ocasio-Cortez charged that Biden's extension of the moratorium on loan payments was merely a stall tactic.

"I think some folks read these extensions as savvy politics, but I don’t think those folks understand the panic and disorder it causes people to get so close to these deadlines just to extend the uncertainty," she wrote on Twitter.

"It doesn’t have the affect people think it does. We should cancel them."

CBS reported that canceling $50,000 in debt per borrower would cost an estimated $904 billion, according to the Federal Reserve Bank of New York.