PETE Davidson has been taking on a slew of jobs outside of Saturday Night Live lately, and he’s just added another one to the list.

As he prepares to make his Met Gala debut with his girlfriend Kim Kardashian on Monday, the 28-year-old is also gearing up to start working on a new TV project.

Pete Davidson is working on a brand new show for Peacock[/caption] He’ll play a fictionalized version of himself in the series, just as his girlfriend continues to show off her real life onscreen on her reality show[/caption]

Kim’s new series, The Kardashians, recently premiered on Hulu, and now her boyfriend has his own show in the works.

Peacock announced on Wednesday that it’d acquired Bupkis, a half-hour sitcom written by, exec-produced by, and starring the SNL star.

It’s set to be a Curb Your Enthusiasm-style show, following Pete as a fictionalized version of himself.

According to the press release: “The series will combine grounded storytelling with absurd elements from the unfiltered and completely original worldview for which Pete is well known.” 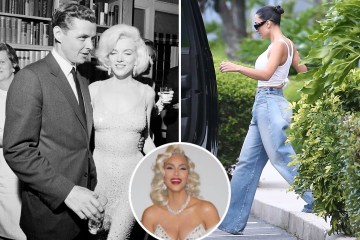 Susan Rovner, the Chairman of Entertainment Content at NBCUniversal Television and Streaming, said: “Pete Davidson is one of the most sought-after comedians today with his smart, one-of-a-kind humor and honest point of view.

“Bupkis will showcase Pete’s funny, surprising and unfiltered brand of comedy audiences have come to love as we continue to bolster our Peacock comedy slate.

“We can’t wait to dive in with Lorne Michaels, Broadway Video and our partners at Universal Television.”

As she mentioned, Pete is working with SNL boss Lorne on this project, where they will both be executive producers.

Andrew Singer and Erin David will also EP, while Dave Sirus and Judah Miller will both writer and EP on the show.

This news of Pete playing himself on TV in his own show comes after Kim revealed that he won’t be showing up on her reality show any time soon.

Kim revealed to Variety that viewers won’t be seeing much of her new boyfriend on the Hulu series.

She revealed: “I have not filmed with him. And I’m not opposed to it. It’s just not what he does.

“But if there was an event happening and he was there, he wouldn’t tell the cameras to get away.

“I think I might film something really exciting coming, but it wouldn’t be for this season.”

Aside from Pete’s upcoming sitcom, he also has a few movies coming out soon.

IMDB offered a summary of what to expect: “When a group of rich 20-somethings plan a hurricane party at a remote family mansion, a party game turns deadly in this fresh and funny look at backstabbing, fake friends, and one party gone very, very wrong.”

The big-screen horror film is slated to be distributed nationwide on August 5, 2022.

He also has his rom-com, Meet Cute, with Kaley Cuoco in the works, as well as thriller The Home and comedy with Machine Gun Kelly, called Good Mourning.

In the meantime, Pete is getting ready to hit up the Met Gala with Kim on Monday.

Earlier this month, Kim revealed to Access Hollywood of the annual event: “I am going, and yes I will be able to see this year.”

She was then asked, “Will you be there with Pete?” and responded with a knowing smile.

The reality star cryptically teased: “I’m not sure. You’re going to have to wait and find out.”

Pete has been busy with acting gigs lately, including his new horror movie, Bodies Bodies Bodies, which released its trailer this week[/caption] Ahead of his new show, Pete is prepping to make his Met Gala debut with Kim on Monday[/caption]

This Stat Shows Just How Unlucky The Celtics Were In Game 6 Vs. Heat