THOMAS TUCHEL is hopeful three key players will be fit to face Manchester United on Thursday.

Chelsea travel to Old Trafford following a hard fought 1-0 win over West Ham at the weekend.

Elsewhere Reece James and Andreas Christensen missed the London derby against the Hammers, while Antonio Rudiger has been injured for the last two games.

But in a boost to Tuchel the trio could all be back in the fold by Thursday night.

The German boss confirmed: “Toni Rudiger was in training yesterday, the same for Reece James. 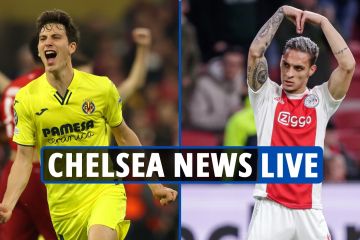 “Hopefully they can do the full training today and give us a green light. We have hopes they can be in the squad and play tomorrow.

“It’s the same for Andreas. We will need another examination because he felt sick. He will come back to the training ground today.”

All three are likely to slot straight back in the starting line up if fit, with Rudiger and Christensen anchoring the defence alongside Thiago Silva.

After playing at centre-back in recent weeks James could be reverted back to his more familiar wing-back position on the opposite flank to Marcos Alonso.

Kovacic’s continued absence means N’Golo Kante and Jorginho are set to partner each other in midfield again.

And Tuchel’s front three picks itself, especially after Romelu Lukaku failed to impress when handed a rare start against Arsenal.

Timo Werner and Kai Havertz will lead the line, with Mason Mount in behind the German duo looking to keep up his recent good run of form.

Alternatively Tuchel could decide tomorrow’s trip to United is too soon for Rudiger, James and Christensen to return.

If that is the case then Trevoh Chalobah and Cesar Azpilicueta could keep their places at the back, with Ruben Loftus-Cheek operating at right wing-back.