SONIC energy weapons on a superyacht were able to defeat approaching pirates, according to yacht insider.

The insider made the claims in a confessional article published in The Times but left readers with more questions than answers.

The unnamed author revealed multiple superyacht secrets that they claim they gathered while onboard many of the vessels.

These secrets included talk of outlandish interiors, including whale skin bar stools, as well as the shocking weapon claims.

They say that pirates tried to attack a yacht in the Arabian Sea and a concerned captain had to deter them using pain-inducing energy weapons.

The weapons were said to include “pain rays” that target human skin, and deafening sonic weapons. 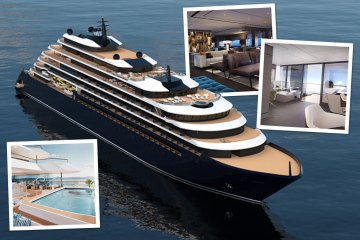 The author explained: “I’ll never forget the wide-eyed horror of one captain as he recounted how he had to deploy a 70m yacht’s arsenal of onboard security (think sonic weapons that deliver ear-splitting, high-volume acoustics and ‘pain rays’ that transmit a narrow beam of electromagnetic energy to heat the skin and cause an unbearable burning sensation) to try to evade Kalashnikov-wielding pirates speeding towards him on Ribs in the Arabian Sea.”

A Kalashnikov is an automatic rifle so the whole encounter sounds terrifying.

The insider didn’t reveal the name of the captain or the vessel.

The sonic weapons mentioned would likely have cost a fortune.

Superyachts themselves cost hundreds of millions upfront and a few million dollars a year to run.

It’s not completely out of the question that an owner would go to great lengths to protect their luxury vessel.

If pirates are approaching, cruise ship crew can use sonic weapons that emit piercing sounds.

There may even be onboard security guards with guns if a cruise ship is travelling through dangerous waters.

Jesse Tyler Ferguson and Justin Mikita Are Expecting Baby No. 2

Who is performing at the Queen's Platinum Party at the Palace?