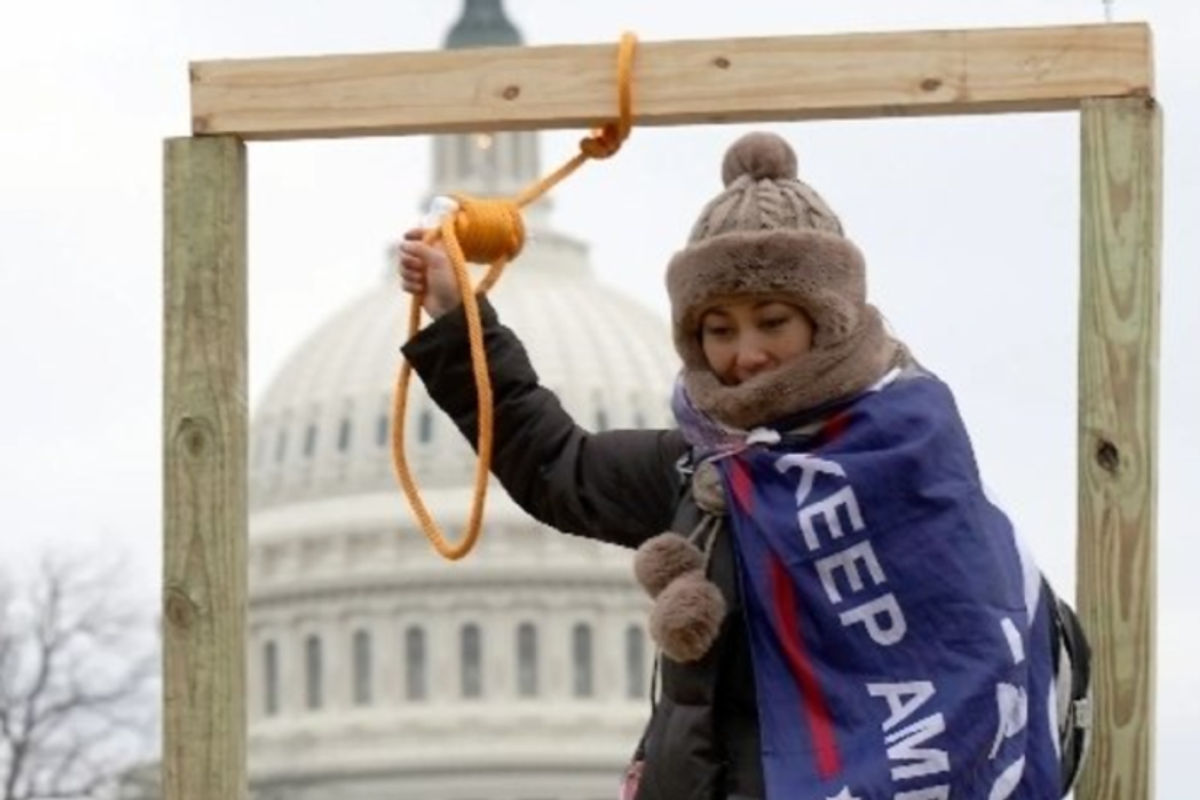 Followers of Donald Trump who thought they might get away with simple misdemeanor charges for invading the Capitol building during the Jan 6th insurrection are instead facing years in prison as prosecutors use a law passed in 2002 that was aimed at curbing financial crimes.

According to a report from the Wall Street Journal, as the courts move on to prosecuting some of the more complicated cases, accused rioters are being hit with charges of obstructing an “official proceeding," which carries a much stiffer penalty if they are found guilty.

As the Journal's Aruna Vizwanatha wrote, prosecutors were looking for a way to more strenuously punish the Capitol rioters who forced lawmakers from both sides of the aisle to flee for their lives and "left more than 100 police officers injured and caused millions of dollars in damage."

Over 150 of the rioters have already entered guilty pleas, many of them related to the misdemeanor crime of entering a restricted federal building, with an estimated 270 of the fans of the former president being slammed with a provision found in the 2002 Sarbanes-Oxley Act.

READ MORE: 'Unite the Right' set the stage for Jan. 6 -- and helped launch some of the biggest players in the Capitol riot

According to the report, "prosecutors searched for tools to elevate some of the cases beyond the misdemeanor charges often applied for unruly but far less momentous Capitol protests. They turned to a provision in the 2002 Sarbanes-Oxley Act, enacted after the accounting-fraud scandal and collapse of Enron, which imposes a potential 20-year sentence on those convicted of obstructing an 'official proceeding.' The measure expanded what counts as obstruction and closed loopholes used by people involved in the Enron fraud," the Journal is reporting.

The report notes that attorneys for a few of the accused insurrectionists have attempted to "poke holes" in the charges but to no avail so far, leading to plea bargaining due to the threat of extended jail time.

"Prosecutors have offered to drop additional charges for some of the rioters if they plead guilty to that count and accept a punishment that would likely involve more than three years in prison. Several have taken that deal, with at least two sentenced to date along those lines. Others have rejected those conditions—specifically the enhanced sentence requirements—and are opting instead to go to trial, " the Journal is reporting. "Many rioters who face that charge have argued in court filings that the law is meant to apply to obstructing pending investigations—where it has commonly been used—rather than an event like the certification of the electoral votes, which some of the defendants described as a pro forma event that was 'ceremonial or ministerial.'"

According to former U.S. Attorney Ben Glassman, he thinks the charge is perfectly legitimate in light of the crime.

“I do think the charge makes sense under the circumstances, but I also think it’s necessarily novel, because these facts haven’t arisen before,” he explained.

"The term ‘official proceeding’…means ‘a proceeding before the Congress,’ ” noted U.S. District Judge Amit Mehta, who, the Journal reports, "is overseeing one of the most high-profile cases to stem from the riot against 17 people affiliated with the Oath Keepers militia."

Mehta added in his Dec 20 decision, "A straightforward reading of that definition easily reaches the Certification of the Electoral College vote."

The report adds, "Defense lawyers say they particularly object to prosecutors’ demands that defendants agree to the enhanced punishments under a plea deal that bump a sentence to 41 months or more, which they say is out of line with past cases."

A Piece Of History: The Bass Amp That Gave Away Osama Bin Laden’s Position To U.S. Forces While He Was Teaching Himself To Play ‘Higher Ground’ By The Red Hot Chili Peppers Is Coming To The Smithsonian