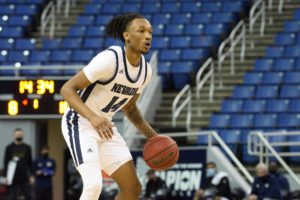 The Wolf Pack (6-5) were originally scheduled to play San Jose State on Wednesday, but that game was postponed and a contest at Kansas (10-1) was quickly scheduled.

Coleman, a sophomore, scored 3points, had 2 rebounds and a steal as Nevada had its 5-game winning streak stopped. The Jeffersonville native was 1 for 2 from the floor and 1 for 2 at the foul line.

Junior guard Grant Sheffield and senior guard Deshman Cambridge both scored 16 points to lead the Wolf Pack, who shot just 37.5 percent from the field (21 of 56) and 29.6 percent from behind the 3-point arc (8 of 27).

Kansas junior guard Christian Braun had 22 points to lead all scorers. He was one of four Jayhawks in double figures.

The Wolf Pack kick off Mountain West Conference play on New Years Day when they host New Mexico at 9 p.m. on Fox Sports 1. The game against San Jose State (6-5) has not yet been reschedule.

How Slightly Stoopid rode the reggae-rock wave to success