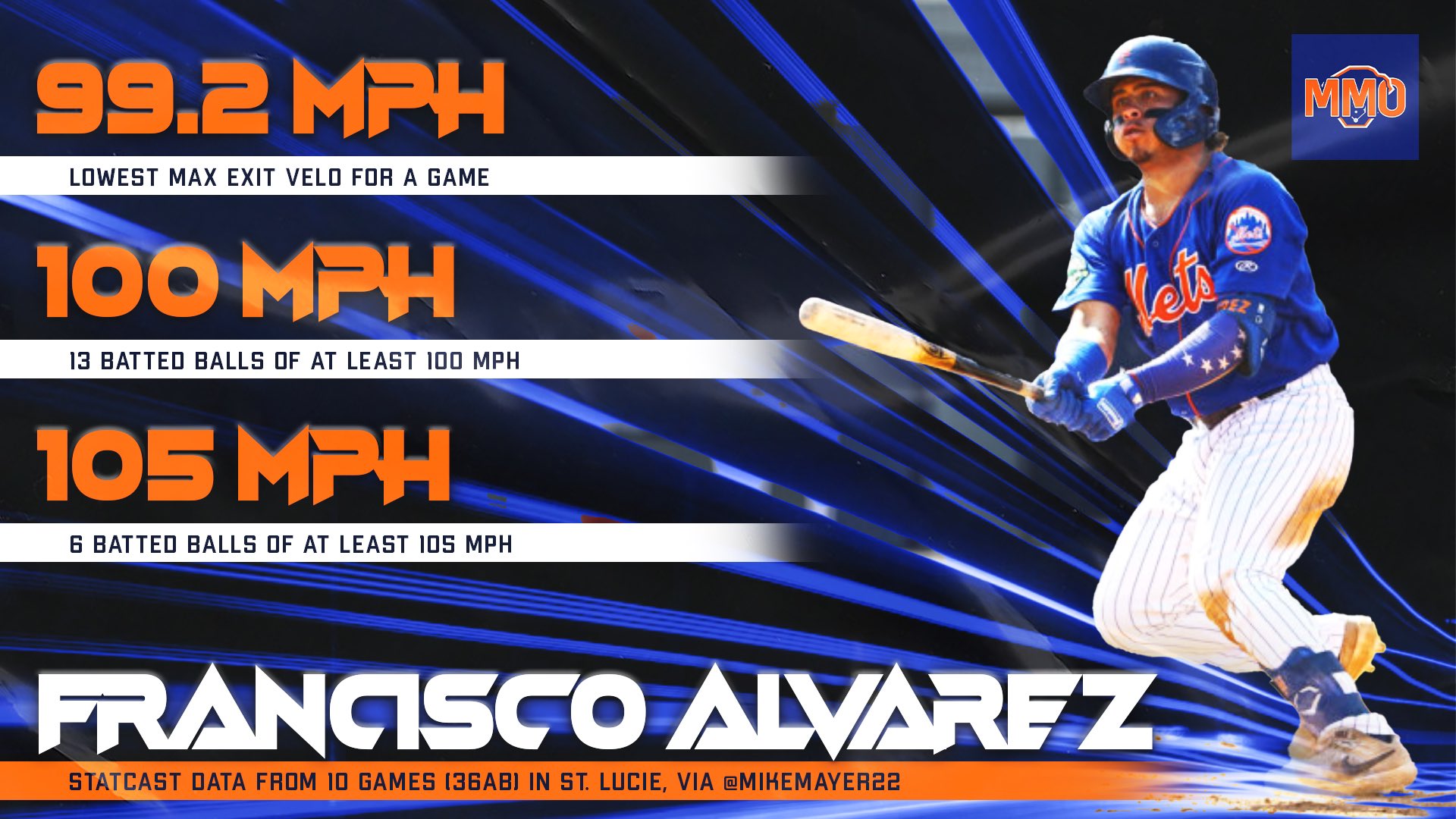 You’ve probably all seen the eye-popping numbers and highlights of big home runs that Mets top prospect Francisco Álvarez produced in 2021, but I recently had the chance to look over some of his Statcast data from 2021, and it’s equally exciting.

Álvarez only played in 15 games with the Low-A St. Lucie Mets before he was promoted. Luckily for us, some of the teams in the Southeast League gather Statcast data during the games. We have 10 games of data for the recently turned 20-year-old, and it’s impressive. I was able to manually look at the data by copy and pasting the game ID from the minor league box score to a Baseball Savant game feed. It shows you the data exactly like it does for the big league games.

Here’s the top exit velocities from each game:

Before we dig into the Statcast data, I feels it’s important to note that Álvarez went 16-for-36 with five doubles, two home runs, 12 RBIs, and 13 walks during this 10-game span. Just ridiculous numbers for a 19-year-old getting his first taste of full season ball.

Álvarez had 27 batted balls in the span we’re looking at. Out of those 27, 13 of them were at least 100 mph and 6 were at least 105 mph. His average exit velocity for St. Lucie was 94.7 mph, and to put that in perspective the average exit velo in MLB this season was a little under 90 mph. The impressive youngster’s hard hit percentage of 63% and average fly ball distance of 356 feet were well above MLB average as well.

Though there’s no publicly available Statcast data from Brooklyn Cyclones games, I was able to talk to a member of the Mets organization to get info on Álvarez. They told me their numbers showed Álvarez was slightly above average in average exit velo, but well above average in number of batted balls above 95 mph and 100 mph.

Digging a bit into the Brooklyn numbers, and one thing that really impressed me from Álvarez was his 1.067 OPS in the month of September. Coming into the 2021 season, Álvarez had only caught 27 pro games during the 2019 season–his only year of pro action. He had caught 51 games coming into September, but was able to push through that new level of workload and end the season on a high note. Not to mention that Álvarez was almost four years younger than his average competitor in High-A East.

Circling back to the average exit velocity of 94.7 mph put up by Álvarez to put in it more perspective. Only three players —Aaron Judge, Giancarlo Stanton, and Vladimir Guerrero Jr.— had an average exit velo above 94.7 mph in the big league during the 2021 season.

Mets fans are really starting to get excited about Álvarez, and it’s tough to blame them given that he’s now a top prospect in the game. Multiple outlets have him among the top 10 prospects in baseball with FanGraphs giving him the highest ranking at No. 5.

Biden Introduces Doocy To The Back Of His Hand