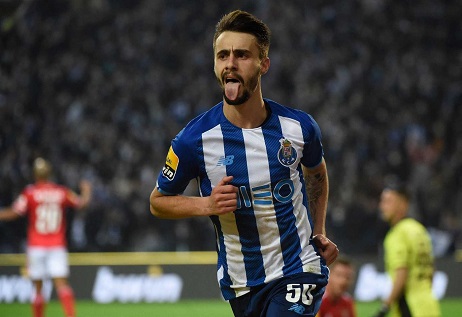 Porto and Sporting lead the way

For the second time in a week, FC Porto received and convincingly beat Benfica. First-half goals by Fábio Vieira and Pepê put the home team in control in front of an ecstatic crowd at the Estádio do Dragão. Upon the restart Yaremchuk found the net to briefly give Benfica hope of a comeback, but André Almeida was sent off straight afterwards, and Mehdi Taremi’s strike made sure Porto went back to the top of the table with a 3-1 win.

The Blue and Whites share first place with Sporting, who were made to work hard before overcoming Portimonense 3-2 at Alvalade last night. PortuGOAL brings you the match reports and video highlights.

The commotion at Benfica over recent days, which resulted in Jorge Jesus being replaced by Nélson Veríssimo as head coach, seemed to inject life into the Eagles, who competed hard with their northern rivals for the first 30 minutes in a Clássico played at a furious pace.

Even so, Porto created more danger in this period, Vieira sending a spectacular shot just over the bar early on, Taremi denied by a last-ditch André Almeida interception and Pepê finding the net, only to see his effort ruled out for offside.

Benfica were not merely defending though, with the lively Everton keeping Porto’s back line busy, and when Rafa slipped a throughball to Yaremchuk, the Ukrainian striker was suddenly one-on-one with Diogo Costa. The Porto goalkeeper came out on top.

Porto then took the game by the scruff of the neck with two goals in three minutes. A quick throw-in led to Fábio Vieira bursting into the box, his low shot from a tight angle going through the legs of Vlachodimos to open the scoring. Soon afterwards it was Otávio who escaped down the right flank, his perfect cross headed into the net by Pepê. 2-0 and that was how it remained as the half-time whistle was blown.

Benfica were not about to fold however, and soon after the restart Rafa Silva took advantage of an enticing crossing position to feed Yaremchuk for an easy finish. The boost to Benfica’s morale provided by the goal was soon deflated however, as André Almeida’s poor control of the ball followed by an ugly lunge at Otávio saw the defender pick up a second yellow card and subsequent red.

Nevertheless, Benfica kept up the pressure in their search for an equaliser, with Rafa and Gonçalo Ramos both going close to making it 2-2, before a triple substitution by Veríssimo backfired as his decision to take off Rafa, João Mário and Ramos ended up taking the wind out of Benfica’s sails.

When Taremi latched onto Vitinha’s pass to end his recent goal drought and score in the 69th minute it was game over. There was still time for man-of-the-match Otávio to miss a gilt-edged chance to compound Benfica’s woes in the closing moments.

Porto go top of the pile on 44 points, ahead of Sporting on goal difference, and the top two now have a 7-point advantage over Benfica.

Sporting rounded off a fabulous year with an 11th straight Primeira Liga victory on Wednesday night, but it was no easy task against an impressive Portimonense.

The Algarve team are enjoying an excellent season and were the better team for the first hour, successfully nullifying Sporting’s attack and always dangerous on the break, with Japanese trickster Nakajima outstanding.

With the visitors leading through a first-half Matheus Reis own goal, the game turned around in a 5-minute spell just before the hour mark when Sporting substitutes Daniel Bragança and Geny Catamo entered the fray, and Portimonense captain Pedro Sá was sent off in between.

At last Sporting took charge of the ball and pushed Portimonense back, the pressure resulting in an 18-minute hat-trick for Paulinho. Lucas Possignolo hooked in a fine goal for Portimonense in stoppage time, but the hosts held on for the three points.